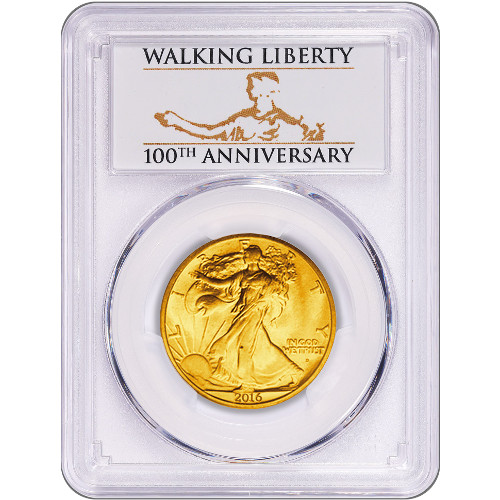 The final release in the Gold American Centennial Series from the United States Mint celebrates an image that is arguably one of the two greatest to grace an American coin. Walking Liberty was a depiction of Lady Liberty created in 1916 by Adolph A. Weinman, and it celebrates its 100th anniversary in 2016 on a 24-karat gold coin. Right now, the 2016 ½ oz Gold American Walking Liberty Half Dollar is available for purchase on Silver.com.

The Walking Liberty depiction features Lady Liberty in full-length figure. She is shown walking toward the setting sun with the American flag draped across her shoulders, with laurels and oak branches in her left hand. The combined imagery is representative of the nation’s drive toward a brighter tomorrow, carrying with it a proud history of civic and military achievements.

Each 2016 ½ oz Gold American Walking Liberty Half Dollar available to you here is a perfect specimen according to the PCGS. MS70 coins exhibit full, original mint luster and lack all detracting flaws. First Strike coins are those received by the PCGS for grading within the first 30 days of the US Mint’s release date for the product.

On the obverse of the coin you’ll find that iconic Walking Liberty design, with engravings of “Liberty,” “In God We Trust,” and “2016.” The reverse of the 2016 ½ oz Gold American Walking Liberty Half Dollar features an American bald eagle perched in anticipation of flight. Engravings on this face include “United States of America,” “E Pluribus Unum,” and “Half Dollar.”

Additional engravings on this product include Weinman’s “AW” initials on the obverse, and the coin’s metal content, purity, and weight on the obverse.