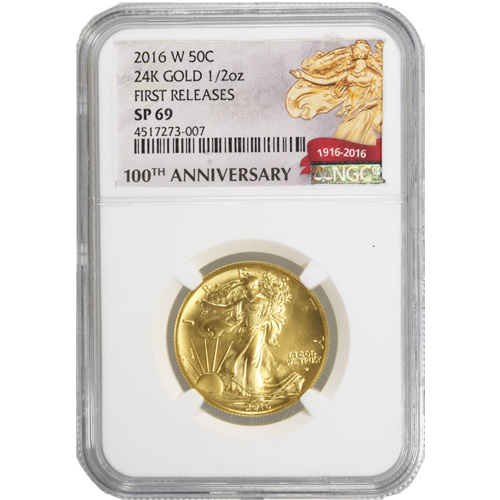 Walking Liberty is one of the two most iconic coin designs in American history. Created in 1916 by Adolph A. Weinman, it featured on the nation’s 50-cent piece for more than three decades and has been revived countless times on both US Mint specimens and private mint issues. One of the most stirring renditions of the design came in the 2016 Gold Centennial Series from the US Mint. Today, 2016 1/2 oz Gold American Walking Liberty Half Dollars are available to you online at Silver.com in near-perfect condition.

The Walking Liberty design was submitted to the United States Mint in 1916 by Adolph A. Weinman as part of a broader contest at the mint to replace the Barber Coinage designs of the US dime, quarter, and half dollar. Though Walking Liberty would gain Weinman recognition and feature on the half dollar from 1916 to 1947, Weinman’s Winged Liberty design would also be selected during the contest and featured on the dime from 1916 to 1945.

All of the 2016 1/2 oz Gold American Walking Liberty Half Dollars in this product listing come with a near-perfect certification from either the PCGS or the NGC. Coins with an SP69 grade have full, original mint luster and no more than two minor detracting flaws present. Examples of acceptable flaws at this level include only minuscule contact marks or hairlines that must be outside of the primary focal points of the coin.

Walking Liberty is featured prominently on the obverse of the 2016 1/2 oz Gold American Walking Liberty Half Dollars. The image was designed by Weinman to depict Liberty marching toward the brightness of another day. She walks toward the sun on the horizon with the American flag over her shoulders and branches of oak and laurel in her left hand.

An American bald eagle strikes a powerful, ready stance on the reverse of the 2016 1/2 oz Gold American Walking Liberty Half Dollar. This bald eagle is set at the edge of a cliff with its wings raised and ready to lift off at any moment. In its talons, the eagle clutches a small sapling growing from the rock face.

These 2016 1/2 oz Gold American Walking Liberty Half Dollars are available with the possibility for additional labels, such as First Strike or Early Release. Silver.com does not guarantee any additional labels will be present and cannot guarantee which grading house certified the coin. Each is, however, in SP69 condition.

Please contact Silver.com if you have any questions when buying gold. Our team is available at 888-989-7223, online using our live chat, and via our email address.