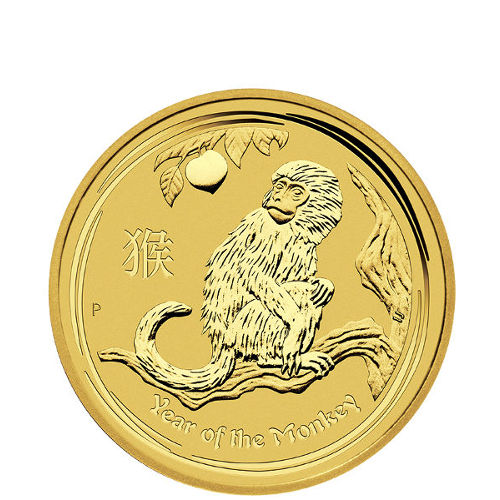 Perth Mint Lunar Series II coins are among the most popular in the world, with a variety of finishes, versions, and weights available for investors. The year 2016 marks the Year of the Monkey on the Chinese Lunar Calendar, and the Perth Mint is ready with an all-new design. Right now, Silver.com offers the 2016 ½ oz Gold Australian Monkey Coin in Brilliant Uncirculated condition.

Gold Australian Monkey coins are produced in a total of eight weights, with each consisting of .9999 fine gold. The program consists of four fractional-weight coins, a 1 oz, 2 oz, and 10 oz, coin, and a larger 1 Kilogram coin.

Perth Mint Lunar Series II coins are available in silver and gold, with each sharing design concepts, but featuring different specific designs. The Year of the Monkey coins, both silver and gold, were designed by Ing Ing Jong.

On the reverse face of the 2016 ½ oz Gold Australian Monkey Coin is the image of a lone monkey sitting in the branch of a peach tree. Engravings include the “P” mint mark, the Chinese symbol for monkey, and the phrase “Year of the Monkey.”

The obverse features Ian Rank-Broadley’s right-profile portrait of Queen Elizabeth II. His design was created in 1998 and has featured on numerous coins throughout the Commonwealth since its unveiling. Engravings include “Queen Elizabeth II,” “Australia,” the year of issue, and the coin’s face value.

Each of these coins are available in Brilliant Uncirculated condition, which means they show no sign of wear and tear, though they may bear flaws from production.

Perth Mint is Australia’s oldest operating facility. The mint has established an unlimited mintage approach for most of its Gold Australian Monkey coins. The coins will be struck to meet demand until the end of 2015, at which point final mintage will be declared and production will cease. All Perth Mint coins are considered legal tender in Australia under the Currency Act of 1965.

If you have any questions, please feel free to contact our Silver.com associates at 888-989-7223. We’re also available online at your convenience using our live web chat service and email options.