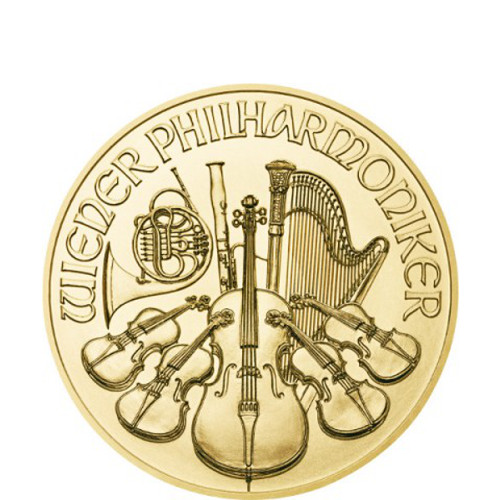 Gold Austrian Philharmonic coins were unveiled by the Austrian Mint in 1989, with just a 1 oz and ¼ oz coin available. The program added various additional weights over the years to expand the program. The first of these additions was the 1/10 oz coin in 1991, followed by these ½ oz coins in 1994.

Other additions over time include the expansion of the program to include a Silver Austrian Philharmonic coin, as well as a 1/25 oz gold version of the coin that debuted in 2014 as part of the mint’s 25th anniversary celebration for the coin program.

On the reverse face of each coin is the image of orchestra instruments used by members of the Vienna Philharmonic. Included in the cornucopia are the Vienna horn, bassoon, harp, four violins, and a cello.

The obverse face features the Gold Concert Hall in Inner Stadt, a neighborhood of the national capital of Vienna. The Musikverein Hall holds an impressive pipe organ often used during performances, which is visible through the pillars of the building in the design.

Thomas Pesendorfer designed the images used on both sides of the Gold Austrian Philharmonic in 1989 when the first coins were struck. His images remain unchanged today, with the exception of the coin’s shift from Austrian Shilling face values (1989 to 2001) to Euros (2002 to current) when Austria joined the European Union.

The Austrian Mint is one of Europe’s oldest mints, having been founded by Duke Leopold V in 1194. He famously used 15 tonnes of silver paid to him by England’s King Richard the Lionheart as ransom to strike the first products from the mint.

Please direct your questions to a Silver.com associate at 888-989-7223, connect with us online via live chat, or send us an email.