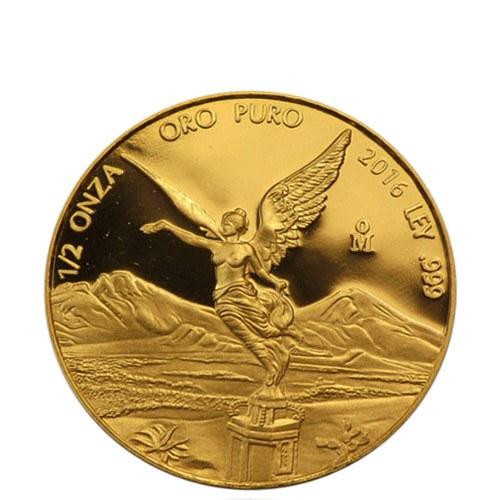 The Gold Mexican Libertad coin has had a rocky production history since it was first introduced in 1981, a year before its popular Silver Mexican Libertad counterpart. The gold version was introduced in bullion in 1981 with 1 oz, ½ oz, and ¼ oz weights available. The program was suspended twice for long periods. Once from 1982 to 1990, and a second time from 1995 to 1999.

Today the Mexican Mint strikes an extremely limited number of Gold Mexican Libertad coins in both bullion and proof, with weights ranging from 1/20 oz to 1 oz, and totaling five weights in all. In fact, for the 2016 ½ oz Gold Mexican Libertad there were just 1,200 coins minted by the Mexican Mint for the year. With such a low mintage, it’s possible the numismatic value could vary based on demand as well as current gold price.

On the obverse of the 2016 1/2 oz Gold Mexican Libertad is the image of Winged Victory, a symbolic image from the War of Independence that represents the nation’s success in fighting against Spain for its freedom from colonial rule.

Each 2016 1/2 oz Gold Mexican Libertad coin listed here is in BU condition. Coins in this condition have no signs of wear and tear, though you may notice minor flaws on its surfaces ranging from breaks in the luster and spotted surfaces to the presence of contact marks as a result of the production process at the mint facility.

The Mexican Mint is the oldest operating facility in the Western Hemisphere, having been founded in 1535. Today it prints all official currency for Mexico under the control of the federal government and guidance of the central bank, the Banco de Mexico.

We encourage Silver.com customers to reach out to us with questions. You can contact our customer service team at 888-989-7223, connect with us online using our live chat, or simply send us an email with your inquiries.