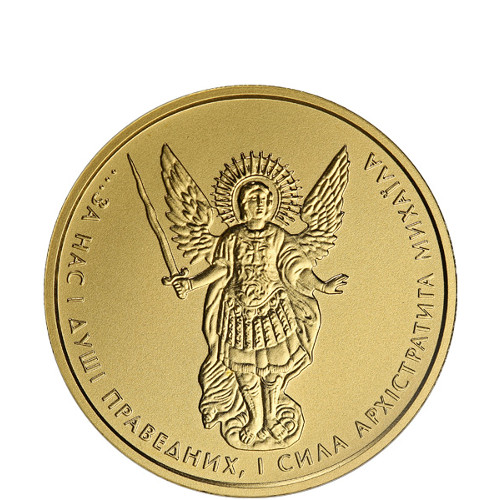 In Ukraine, the Archangel Michael is referred to as the protector of the capital city of Kiev, as well as the estate of Ukraine. Saint Michael is known as the leader of God’s army and the defender of Heaven as he led the rest of the angels in a war against the enemy who is not only referred to as Satan or the devil, but also the dragon.

On the reverse of each of these coins, you will see the Coat of Arms for the country of Ukraine. There are also engravings on this side of the coin in Ukrainian.

Each of these 2016 1/2 oz Gold Ukrainian Archangel Michael Coins is in Brilliant Uncirculated condition. Coins in this condition will show no signs of wear and tear, but there may be minor flaws on each coin. These flaws include breaks in luster, spotted surfaces and contact marks that are caused by the coining process.