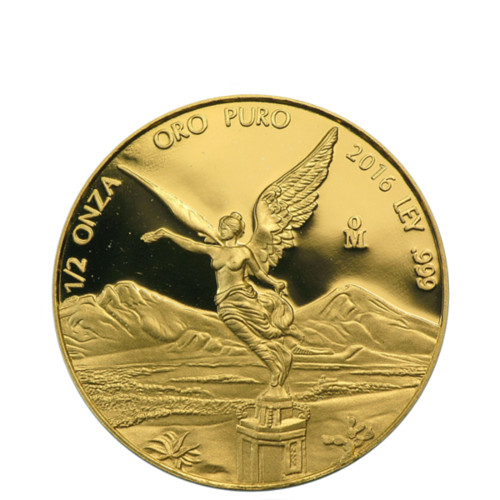 Numismatics looking to add remarkable proof coins to their collection should look no further than the Proof Gold Mexican Libertad coin. The collector’s version of the official bullion coin of Mexico, this product features historic Mexican coin designs and a stunning proof finish. The 2016 ½ oz Proof Gold Mexican Libertad coin is available on Silver.com.

The Gold Mexican Libertad made its first appearance in 1981 in bullion, with a 1 oz, 1/2 oz, and 1/4 oz coin available. That production run lasted just one year, and did not restart again until 1991. The bullion coin was the only offering for a long period of time, with the proof coin not introduced until a number of years later.

On the obverse of all 1/2 oz Proof Gold Mexican Libertad coins you’ll find the image of the statue of Winged Victory. Reflective of the actual statue erected in Mexico City in 1921, Winged Victory represents the victory of Mexico over Spain in the War of Independence.

The reverse of the 2016 1/2 oz Proof Gold Mexican Libertad coin includes the coat of arms for Mexico. Though 10 versions of the seal have been used since the 1820s, this is the modern version and the only one that appears on the reverse of fractional-weight Mexican Libertads. Coins larger than 1 oz. feature all 10 historic versions, as well.

Proof Gold Mexican Libertad Coins have no official face value engraved upon them. Banco de Mexico issues the coins with a floating face value, which means the coins have a different value depending upon market conditions at the time. The Mexican Mint, founded in 1535, is the official sovereign mint of Mexico and is controlled by the federal government and Banco de Mexico.

We encourage all Silver.com shoppers to contact us with questions. You can reach our customer service team at 888-989-7223, connect with us online through our live chat, or simply send us an email.