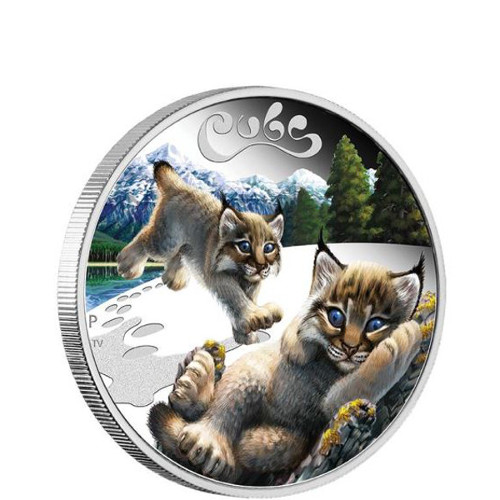 The Perth Mint has a history of releasing some of the most stunning and sought-after proof coins in the world, and the Australian Cub Series is just another example of its refining prowess. These coins are ½ oz specimens that all feature adorable and cuddly cubs from wild cat species around the globe in the design. Today, the 2016 ½ oz Silver Australian Cub Series Lynx Proof Coin is available on Silver.com for purchase.

All 2016 ½ oz Silver Australian Cub Series Lynx Proof Coins are available inside a black display case from the Perth Mint, and ship inside of a colorized box celebrating the Lynx Cub in the series. The last of the five coins in this release, the Lynx Cub was preceded by the Tiger Cub, Jaguar Cub, Leopard Cub, and White Lion.

Each of the coins in the Silver Australian Cub Series from the Perth Mint offers a perfect combination of real-life, color on the reverse and .999 fine silver. On each coin’s reverse face, the image of different cubs from the large feline species of the world are colorized to bring the images to life.

On the reverse of the 2016 ½ oz Silver Australian Cub Series Lynx Proof Coin you’ll find the colorized image of two lynx cubs at play. As one cat lays against a rock in the foreground, another playfully stocks his companion, sneaking up behind him in the snow to playfully pounce on his buddy.

The obverse of all Australian Cub Series coins includes the right-profile portrait of Queen Elizabeth II. Created in 1998 by Ian Rank-Broadley, this design is the fourth-generation depiction of Her Majesty to appear on Australian coinage.

The term lynx is often used by some to refer to a specific species, but in reality it can be used to describe one of any four species within a larger genus of medium-sized wild cats. This family includes the bobcat. Lynx are recognizable by their short tails, tufts of black hair on the tips of their ears, and large, padded paws.

Australia’s Perth Mint was founded in 1898 by the British Royal Mint, and remained in British control until it was passed to the Western Australia state government in 1970. All Perth Mint coins hold legal tender status in Australian under the Currency Act of 1965.

Please direct your questions to a Silver.com associate at 888-989-7223, or connect with us online using our live chat and email features.