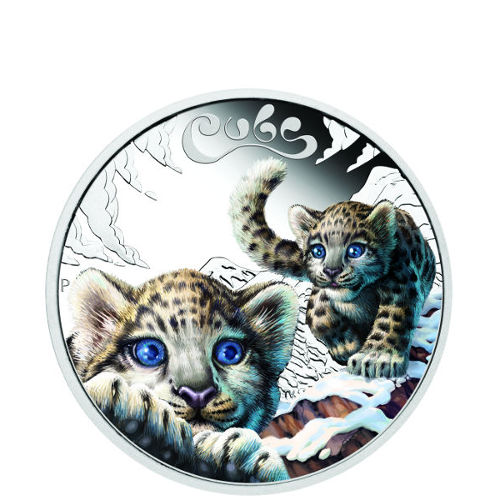 The Silver Australian Cub Series is one of the most popular coin programs of 2016 so far, with stunning colorized designs, themed shippers, and limited mintages. Each coin in the planned series generates interest among collectors, and now the third design has arrived. Today, the 2016 ½ oz Silver Australian Cub Series Snow Leopard Proof Coin is available to purchase on Silver.com.

Each of the coins in the Silver Australian Cub Series from the Perth Mint offers a perfect combination of real-life, color on the reverse and .999 fine silver. On each coin’s reverse face, the image of different cubs from the large feline species of the world are colorized to bring the images to life.

With the release of the 2016 ½ oz Silver Australian Cub Series Snow Leopard Proof coin, the Perth Mint highlights the endangered snow leopard of Central and South Asia. As of 2003, the global population of the animals was estimated at somewhere between 4,000 and 6,500 adults. Among the unique features of the snow leopard are its long tails, which are (on average) longer relative to the rest of the body than all other species of cat save the marbled cat.

On the obverse face of each of these coins you’ll find Ian Rank-Broadley’s right-profile portrait of Queen Elizabeth II. Her Majesty’s image has appeared on commonwealth coinage since she ascended to the throne in 1952, and is occasionally revamped to reflect her age.

The reverse side of the 2016 ½ oz Silver Australian Cub Series Snow Leopard Proof coin bears the colorized image of a snow leopard, complete with background imagery that reflects its natural habitat in Central and South Asia.

Perth Mint was established as the third and final Royal Mint facility in Australia in 1899. Today it operates separately from the Royal Australian Mint, and is controlled by the state government of Western Australia.

If you have questions, don’t hesitate to ask Silver.com. Our customer service team is available on the phone at 888-989-7223, online using our live chat, or via our email address. To find similar products, visit our Perth Mint Silver Coins page.