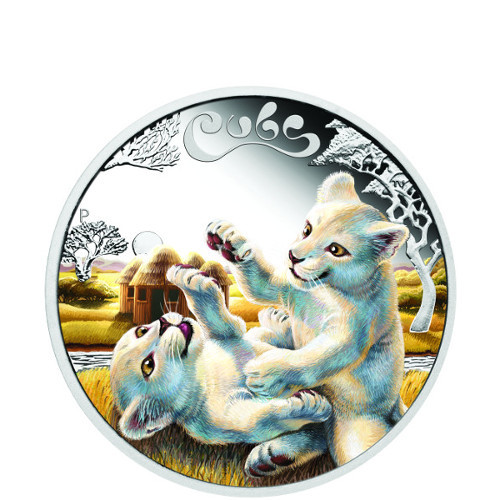 The Perth Mint has a history of releasing some of the most stunning and sought-after proof coins in the world, and the Australian Cub Series is just another example of its refining prowess. These coins are ½ oz specimens that all feature adorable and cuddly cubs from wild cat species around the globe in the design. Today, the 2016 ½ oz Silver Australian Cub Series White Lion Proof Coin is available on Silver.com for purchase.

The reverse side of the 2016 ½ oz Silver Australian Cub Series White Lion Proof Coin includes the image of two you white lion cubs playing with each other on the open plains of Africa. One cub is clearly the more aggressive player as it paws at the other one’s face while it is lying on its back.

On the obverse of all 2016 ½ oz Silver Australian Cub Series coins is the image of Queen Elizabeth II. Created by Ian Rank-Broadley in 1998, this represents the fourth-generation image of Her Majesty since she ascended to the throne in 1952.

The Australian Cub Series highlights a different species in each of the planned releases, with one cat species originated from each of the inhabited continents of the world. The White Lion is found almost exclusively in the Timbavati region of South Africa. While many of these cats do have a white appearance, most are blonde in color or even tawny like the African lion.

Please don’t hesitate to contact Silver.com with any questions. You can reach us at 888-989-7223, or connect with us online using our live chat and email features.