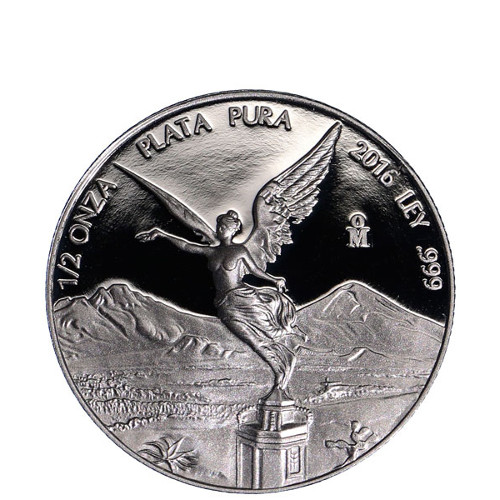 Silver Libertads might exist in the shadow of the Silver American Eagle and Silver Canadian Maple Leaf coins in North America, but it is a star in its own right. With low mintage figures and a beautiful design, the Silver Libertad is a popular target for both investors and collectors. The 2016 ½ oz Proof Silver Mexican Libertad Coin is available in a capsule on Silver.com.

Starting in 2003, the popularity of certain weights over others became clear and the smaller 1/20 oz and 1/10 oz coins were struck to higher mintages than the ¼ oz and ½ oz Proof Silver Mexican Libertad. As of 2015, the mintage figures for the ½ oz and ¼ oz coins were roughly half that of the smaller two fractionals.

The reverse of all 2016 ½ oz Proof Silver Mexican Libertad coins bears the image of the coat of arms. The Mexican seal includes a bald eagle in the center, perched atop a cactus as it battles to control a snake. The symbolism identifies Mexico’s struggle to free itself from the serpents of Spanish oppression.

On the obverse of all 2016 Proof Silver Mexican Libertad coins is the image of Winged Victory. Her depiction is included atop the Mexican Independence Victory Column, which was erected in central Mexico City in 1920 on the centennial celebration of the nation’s victory over Spain in the War of Independence.

Each of these 2016 ½ oz Proof Silver Mexican Libertad coins listed on Silver.com ships to you in a capsule meant to protect the coin against any damage during the shipping and handling process, and makes for excellent and safe display as a part of your personal collection.

The Mexican Mint was founded in 1535 by the Spanish. Located in Mexico City, today it is the sovereign mint of Mexico and produces both commemorative and circulation currency under the guidance of Banco de Mexico.

We encourage Silver.com customers to contact us at 888-989-7223 with any questions. You can also reach us online through our live chat and email address.