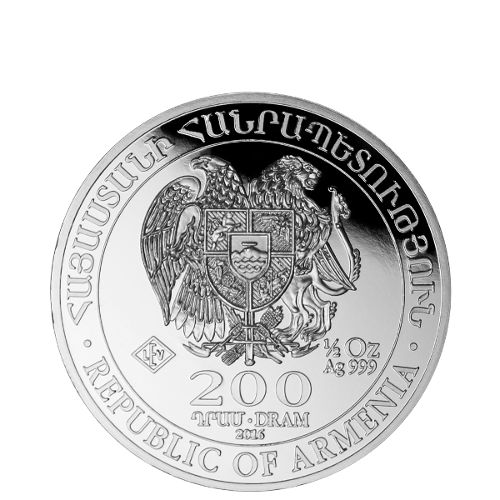 One of the latest coins introduced to the global marketplace is the Silver Armenian Noah’s Ark coin. Inspired by the biblical tale of Noah and his ark, the coins are produced as an official bullion product of Armenian at the German Geiger Edelmetalle Mint. The images featured on the coins reverse and obverse faces were chosen for their deep and special connection to this Eastern European nation. Today, Silver.com offers the 2016 ½ oz Silver Armenian Noah’s Ark coin for purchase.

Silver Armenian Noah’s Ark coins were first introduced in 2011 as the official silver bullion product of Armenia. The coins were originally available only in ¼ oz, ½ oz, and 1 oz in 2011, with a 5 oz, 10 oz, and 1 Kilogram coin added to the program in 2012.

The nation of Armenia seems an unlikely choice for a Noah’s Ark themed coin, until you dig into the history of the nation. Noah’s Ark came to rest upon Mount Ararat when the floodwaters sent by God subsided. Until the 20th century, Mount Ararat was located on the border between Turkey and Armenia, with the line running directly down the center of the mountain.

Although Turkey now has full claim to Mount Ararat after national borders were redrawn at the end of World War I, the nation of Armenia still considers the mountain important to its history. So much so that it is also featured in the coat of arms for the country.

On the reverse side is the image of Noah’s Ark as it floats atop the waters. Mount Ararat is visible in the background, while a dove is seen in the foreground. The obverse bears the coat of arms for the Republic of Armenia, along with engravings in both English and Armenian.

Silver.com encourages all of its customers to ask questions when they arise. To that end, we are available to help answer those questions at 888-989-7223. For added convenience, we are also available online using our live web chat feature and an email address. If you are looking for similar products, check out our collection of Silver Armenian Coins.