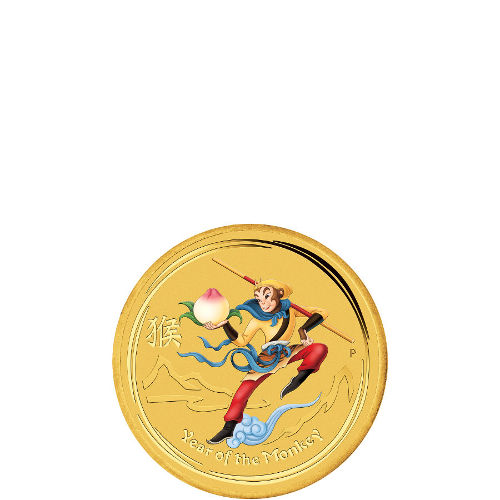 The Lunar Series II program from the Perth Mint is already one of the most diverse offerings in the world today, especially in a market that is increasingly populated with lunar-themed coins. Now, the mint offers another set of unique designs with the release of two new designs honoring the Monkey King. Right now the 2016 1/20 oz Gold Australian Lunar Monkey King Coin is available to purchase in BU condition from Silver.com.

In the Chinese novel Journey to the West, a Buddhist monk travels to India to collect a group of scriptures written by those who went before him. In the tale, Xuan Zang tells of the Monkey King, a bold, daring, and rebellious creature.

On the reverse of the 2016 1/20 oz Gold Australian Lunar Monkey King Coin you’ll find the colorized Monkey King logo. Holding his battle spear in one hand, you’ll notice two mountains traced into the design, with one in the foreground and one rising into the background.

Flip the coin over and the obverse holds the design of Queen Elizabeth II. This right-profile portrait is the fourth-generation image used since 1952 on commonwealth coins, and was created in 1998 by Ian Rank-Broadley.

All 2016 1/20 oz Gold Australian Lunar Monkey King Coins in this collection are Brilliant Uncirculated specimens. Coins in BU condition are available with no signs of wear and tear, though you may notice blemishes including breaks in the luster, spotted surfaces, or contact marks from the coining process.

Founded in 1899, the Perth Mint opened as the third and final Royal Mint system facility just three years before Australia’s federation movement. The Perth Mint is the only remaining Royal Mint facility in operation today, and predates the new Royal Australian Mint by 66 years.

If you have any questions, we encourage you to reach out to Silver.com customer service associates at 888-989-7223, connect with us online through our live web chat, or simply send us an email.