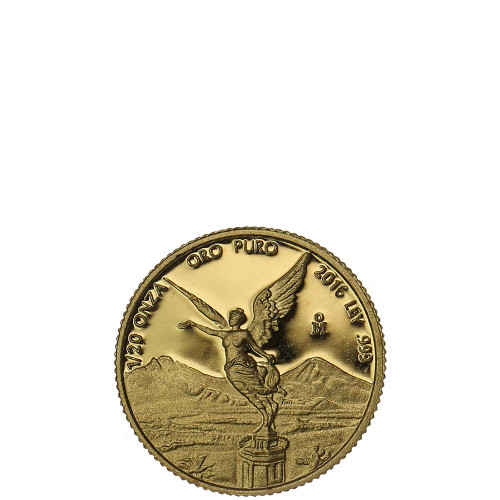 Proof Gold Mexican Libertad coins offer collectors one of the most diverse options for their private collections. Available in a total of five different weights, with four extremely affordable fractional-weight coins, the Proof Libertad is a popular choice among annual release coin programs globally. Today the 2016 1/20 oz Proof Gold Mexican Libertad Coin is available to you online at Silver.com.

The Gold Mexican Libertad coin is one of the only sovereign bullion coin programs with no assigned face value. The coins are legal tender in Mexico and backed by Banco de Mexico, however they have a floating face value that means to use them in an economic transaction would require contacting Banco de Mexico to learn the current value.

Mexican Libertad coins, available in gold and silver, was inspired by the Gold Centenario coin from the Mexican Mint. Introduced in 1921 and struck through 1947, these coins included imagery representative of the 100th anniversary of Mexican independence from Spain.

Included on the Centenario was a design of Winged Victory, a figure that represented the struggle for freedom of the Mexican people during their fight for independence that began in the 1820s. When the Mexican Libertad was introduced in 1982, it featured the original Centenario design, but now has a modified, modernized version of that design.

On the obverse of the 2016 1/20 oz Proof Gold Mexican Libertad you’ll find the image of Winged Victory. This image is symbolic of the nation’s struggle for independence during an 8-year war with Spain. Her wreath held high in her right hand represents the freedom of self-governance, while the broken chains in her left hand symbolize the broken chains of bondage and servitude.

The reverse of all 1/20 oz Proof Gold Mexican Libertad coins includes the coat of arms for Mexico. The image includes a Mexican bald eagle perched on a cactus arm as it battles with a serpent.

The Mexican Mint is the oldest operating mint facility in the Western Hemisphere, pre-dating the United States Mint by more than 250 years. Once responsible for the production of all Spanish colonial coinage used throughout the hemisphere, today it is the sovereign mint of Mexico and overseen by Banco de Mexico.

If you have any questions, please don’t hesitate to reach out to Silver.com. Our customer service team is available at 888-989-7223, online using our live chat, and via our email address.