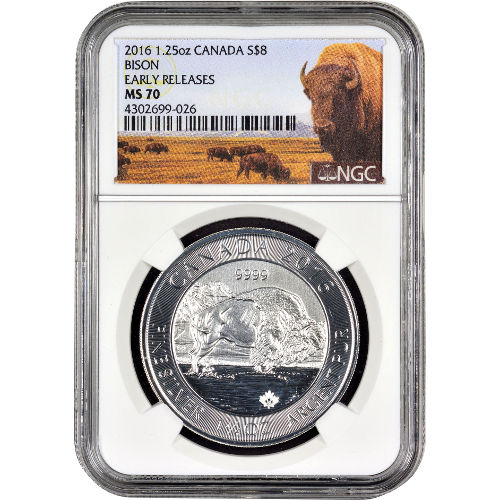 Silver Canadian Bison coins are part of an ongoing trend in Royal Canadian Mint bullion production. The mint has used wildlife from the nation as inspiration for coin programs and specific designs, starting with the Canadian Wildlife Series in 2011.

The Silver Canadian Bison coins available on Silver.com at this moment are perfect specimens according to the NGC. Coins with an MS70 grade have full, original luster from the mint and feature no detracting flaws of any kind.

As part of the Early Release Series, these coins must have been packaged and shipped by the Royal Canadian Mint to the NGC (or approved NGC depository) within the first 30 days of the date of issue for the coins.

The reverse face features the image of a massive bison standing at the edge of a creek. Bison designs used on the coins in this series will be changed with each year’s new release. Engravings on this side include the nation of issue, year of issue, purity, and metal content of the coin.

On the obverse is the right-profile portrait of Queen Elizabeth II. Her Majesty’s effigy is featured along with engravings of her name, the phrase “D.G. Regina,” and the face value of the coin. Each of these 2016 Silver Canadian Bison coins features the RCM’s latest security measures, most notably the micro-laser engraved radial lines and maple leaf privy mark with year of issue.