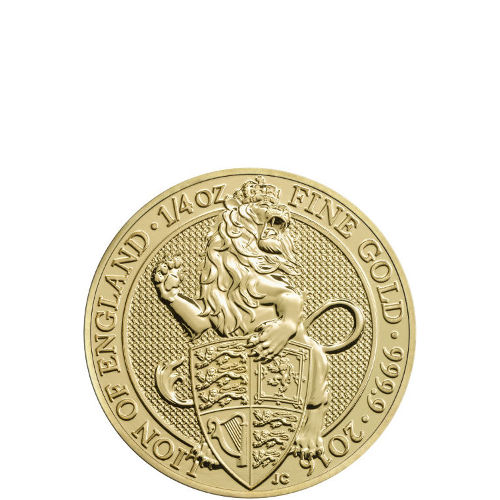 Any quantity available for $219.25 per coin over spot!

When Queen Elizabeth II stepped forward to official accept the crown of Queen of England in 1953, there were 10 wooden statues created by James Woodford that surrounded her during the ceremony. The first of these was the Lion of England, and it features on a beautiful new series of coins from the Royal Mint released started in 2016. Today, the 2016 1/4 oz Gold British Queens Beast Coin is available to purchase on Silver.com.

More and more often investors are buying gold in fractionals to meet their needs because of their divisibility. Spot price of gold changes frequently, but can always be divided or multiplied to get your fractional piece’s spot value.

Jody Clark became the youngest Royal Mint engraver to ever create a portrait of Her Majesty Queen Elizabeth II when he unveiled the latest design of the monarch for United Kingdom coinage. His 2015 design replaces that of Ian Rank-Broadley, which has been in use since 1998.

On the obverse of the Gold British Queens Beast Coin you’ll find Clark’s all-new portrait of Her Majesty Queen Elizabeth II. Captured in right-profile relief, Her Majesty’s portrait is surrounded by engravings of her name, the year of issue, and the face value of the coin in Pound Sterling.

The reverse of the 2016 1/4 oz Gold British Queens Beast Coin includes the fearsome image of the Lion of England. It is depicted standing behind the Royal Coat of Arms, with one paw holding the shield and the other raised, poised to strike back at the nation’s enemies.

All 2016 1/4 oz Gold British Queens Beast Coins in this listing are Brilliant Uncirculated products. Each one exhibits no signs of wear and tear, however you may notice minor blemishes such as breaks in the luster, spotted surfaces, or contact marks from the coining process.

The Royal Mint was originally founded in the early 9th century as the London Mint. For more than one-thousand years it has coined official currency for the crown, and today produces the official Pound Sterling of the United Kingdom.

Please don’t hesitate to reach out to Silver.com customer service with any questions. You can contact us on the phone at 888-989-7223, connect with us online using our live web chat, or send us an email with your inquiries.