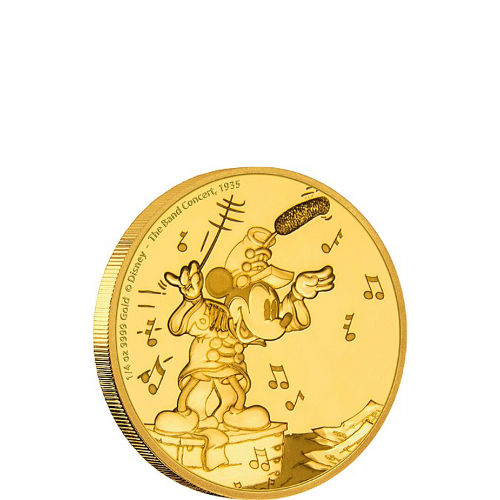 Mickey Mouse was Walt Disney’s first and to this day most popular character. Debuting in 1928 in the animated short Steamboat Willy, Mickey Mouse has charmed children and adults alike over the course of 10 different decades and nearly 90 years in total. Today, the 2016 1/4 oz Niue Gold Mickey Mouse The Band Concert Series Coin is available online from Silver.com.

The New Zealand Mint has a wide range of Disney-themed products available in its gold and silver coin catalogs. Each of these 2016 1/4 oz Niue Gold Mickey Mouse The Band Concert Series coins features the image of Mickey Mouse from the era of the 1930s. These coins include a design of Mickey as the bandleader.

In the release of The Band Concert, Walt Disney unveiled his fledgling company’s first-ever colorized animated short. Mickey is featured as the bandleader in a traditional outfit, conducting the members of his band as Donald Duck tries to join in on the fun, only to distract Mickey and the other members of the band.

The reverse face of the 2016 1/4 oz Niue Gold Mickey Mouse The Band Concert Series features Mickey in that leading role as the bandleader. He stands on a soapbox directing the members of the band, with musical notes included in the design and sheet music on the ground in front of him.

On the obverse of each coin you’ll find the image of Queen Elizabeth II. Her Majesty has ruled over the United Kingdom as Queen since 1952 when she ascended to the throne following the death of her father. This particular image is that of Her Majesty from Ian Rank-Broadley in 1998, depicting a fourth-generation aged image of the Queen.

The New Zealand Mint is a privately-owned facility that is located in Auckland. Although the mint has a name that indicates it would be the sovereign mint, it is not associated with the national government. New Zealand dollars and coins are struck overseas by the Royal Canadian Mint and Royal Mint in London.

If you have questions, please don’t hesitate to ask. You can reach out to Silver.com at 888-989-7223, connect with us online using our live web chat, and by sending us an email.