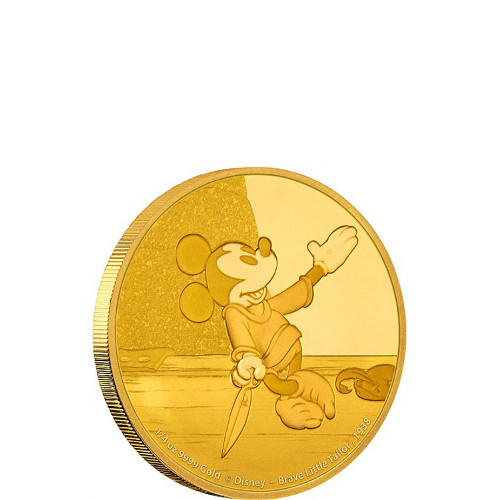 Mickey Mouse has been a favorite of children around the world since he debuted in 1928. Originally voiced by his creator, Walt Disney, Mickey continues to pull in new generations of children viewing Disney animated shorts, feature films, and visiting the many parks of the Disney franchise. Right now, the 2016 ¼ oz Gold Niue Mickey Mouse Brave Little Tailor Series Coin is available on Silver.com.

In the feature film Brave Little Tailor, Disney takes viewers to the medieval world where Mickey Mouse is a humble tailor in a small kingdom. Terrorized by a menacing giant, the king asks for warriors willing to kill the giant.

Although he is diminutive in stature, Mickey eventually defeats the giant using his superior knowledge over the giant’s brawn. In the process, he frees the kingdom and wins the love and affection of Princess Minnie. The film was released in 1938, and today the New Zealand Mint captures its beauty on a series of gold and silver coins.

The reverse of all 2016 ¼ oz Gold Niue Mickey Mouse Brave Little Tailor Series coins features the image of Mickey as he departs the kingdom to face off with the giant. A calm look on his face, this humble tailor leans confidently on his sword.

On the obverse of all Niue Mickey Mouse Series coins you’ll find the right-profile portrait of Queen Elizabeth II. This effigy was created in 1998 by Ian Rank-Broadley as the fourth-generation depiction of Her Majesty since her coronation as Queen of England.

New Zealand Mint is a private facility located in the city of Auckland. It is the nation’s only active mint, but does not work with the federal government on national currency. This job is handled by the Royal Canadian Mint and Royal Mint.

If you have questions, don’t hesitate to ask. Silver.com associates are available at 888-989-7223, online using our live chat, and via our email address.