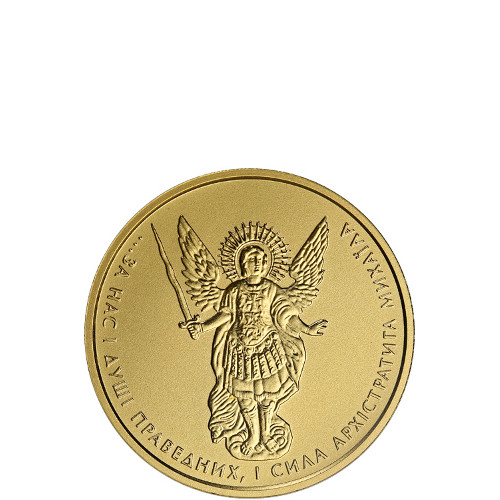 While Ukraine isn’t well-known for precious metal production, the country has a bullion coin program that is quickly bringing prominence to Ukraine’s coins. The Ukrainian Archangel Michael Coins are available in both gold and silver. The gold coins even come in a variety of different sizes. These coins have been in production since 2011, and, now, you can get the 2016 1/4 oz Gold Ukrainian Archangel Michael Coin from Silver.com.

Christians, Jews and Islamists all know the story of the Archangel Michael. He is known as a healer of the sick, as well as the leader of God’s army. He is said to be the defender of Heaven, as he lead the other angels to defeat God’s enemy that is referred to as the dragon, Satan and the devil.

The obverse of each 2016 1/4 oz Gold Ukrainian Archangel Michael Coin features the image of the Archangel Michael in full Roman armor. He holds a sword in his right hand and a large halo glows around his head. He is standing atop the dragon with his wings outstretched.

On the reverse of each of the 2016 1/4 oz Gold Ukrainian Archangel Michael Coin, you will see the Ukrainian Coat of Arms, as well as other engravings in Ukrainian.

All of the coins in this listing are in Brilliant Uncirculated condition. All coins in this condition will be free of signs of wear and tear, but they may still have some minor imperfections. Some of these flaws include breaks in the luster, spotted surfaces and contact marks from the coining process.