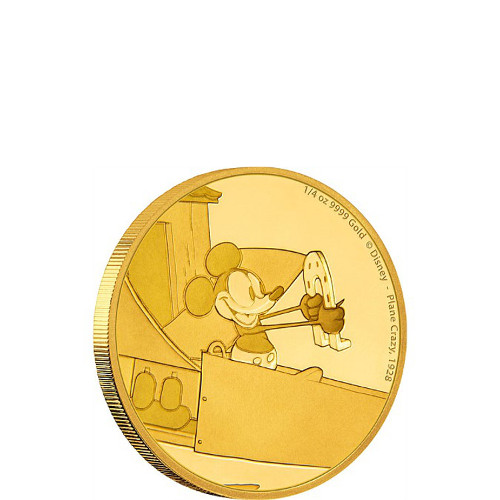 Walt Disney’s most popular character is one of the most widely known cartoons in the world. Mickey Mouse is easy for everyone to recognize, but this famous mouse was once just a dream. In 1928, Disney released an animated series of short films starring Mickey. The New Zealand Mint is honoring one of the early works featuring Mickey with a new coin. Now, you can purchase the 2016 1/4 oz Gold Niue Mickey Mouse Plane Crazy Series Proof Coin at Silver.com.

Mickey Mouse’s short animated film Plane Crazy was released in 1928. This black-and-white, silent film depicts Mickey Mouse as a farmhand who gets the idea to build his own airplane. He tries to build the airplane with spare car parts and farm equipment. In 1929, the film was actually re-released with sound.

Plane Crazy was inspired by Charles Lindbergh and his flight to France from the United States. Mickey’s makeshift plane wasn’t nearly as successful as Lindbergh’s plane, however. Even with the help of a lucky horseshoe from Minnie Mouse, Mickey quickly falls out the plane.

On the reverse of each 2016 1/4 oz Gold Niue Mickey Mouse Plane Crazy Series Proof Coin features a scene with Mickey sitting in the cockpit of the plane he pieced together. He holds the horseshoe that Minnie Mouse gifted him. While the coin is colorized, there isn’t much color since the film was shot in black-and-white.

The obverse of each coin bears the image of Queen Elizabeth II. Her image has been featured on commonwealth currency and coinage since she took the throne in 1952, but this image is the fourth generation version of Her Majesty to show up on New Zealand coins. The image was created by Ian Rank-Broadley in 1998.

Each 2016 1/4 oz Gold Niue Mickey Mouse Plane Crazy Series Proof Coin ships in a wooden display box that isn’t only great for protecting your new coin, but it is also a great way to display your new purchase. Each coin also comes with a Certificate of Authenticity and a matching artwork shipper box.

If you have questions, don’t hesitate to ask a Silver.com associates are available at 888-989-7223, online using our live chat, and via our email address.