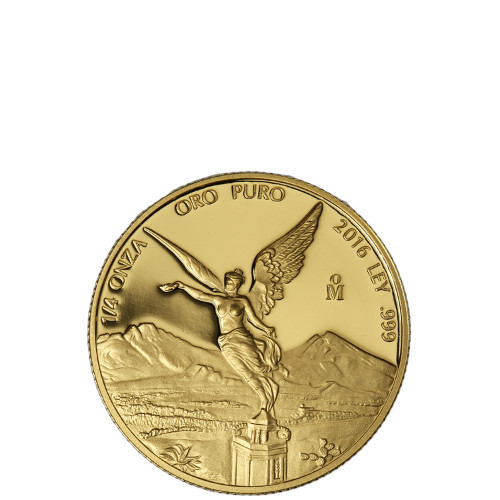 One of the most popular coins in North America at the moment is the Gold Mexican Libertad. Overshadowed by the Canadian Maple Leaf and American Eagle, the Mexican Libertad is the official sovereign coin of Mexico. With a wonderful design, impressive purity, and limited availability, these coins are in high demand. Right now, the 2016 ¼ oz Proof Gold Mexican Libertad Coin is available to purchase online at Silver.com.

The Mexican Libertad Series, available in gold and silver, was inspired by the Gold Centenario coin from the Mexican Mint. Introduced in 1921 and struck through 1947, these coins included imagery representative of the 100th anniversary of Mexican independence from Spain.

Included on the Centenario was a design of Winged Victory, a figure that represented the struggle for freedom of the Mexican people during their fight for independence that began in the 1820s. When the Mexican Libertad was introduced in 1982, it featured the original Centenario design, but now has a modified, modernized version of that design.

On the obverse of all 2016 1/4 oz Proof Gold Mexican Libertad Coins is the image of the Winged Victory statue found in Mexico City. Her effigy was erected in Mexico City started in 1920 to celebrate the 100th anniversary of Mexican independence, along with the release of a gold Centenario coin, from which the modern Mexican Libertad draws its design inspiration.

The reverse of the 1/4 oz Proof Gold Mexican Liberatd Coin features the coat of arms for Mexico. There are 10 historic versions of the seal that have been used, but only the modern version is depicted on the reverse of these coins. The smaller surface area on the fractional-weight coins in this series makes it impossible to fit the circle of 10 historic crests around the modern seal.

The Mexican Mint is the oldest operating facility in North America, having been founded by Spanish conquistadors in 1535. The mint is under the direct control of the federal government in Mexico and its daily operations are overseen by Banco de Mexico.

If you have questions about these products, don’t hesitate to reach out to a Silver.com associate at 888-989-7223. You can also connect with us online through our live web chat and email services.