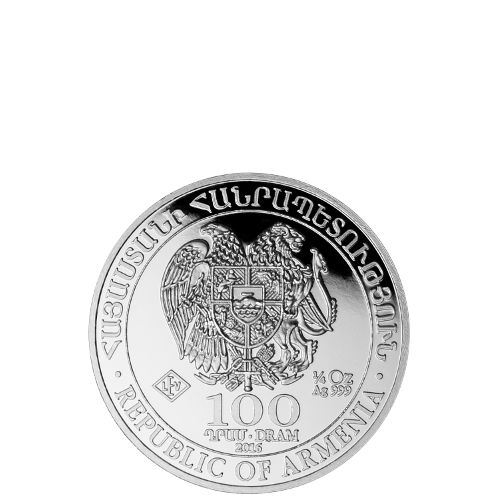 Noah’s Ark is a biblical tale from the Christian bible’s book of Genesis. However, for the people of Armenia it has a very physical and real connection to the nation. In the story, Noah’s Ark comes to rest on the side of Mount Ararat.

Mount Ararat was historically located along Armenia’s border with Turkey, which split the massive peak along its center line. Today, Mount Ararat is located entirely within Turkey following a redrawing of national boundaries in Europe after World War I. Additionally, Armenia was the first modern republic in the world to adopt Christianity as an official state religion.

On the reverse side of each 2016 ¼ oz Silver Armenian Noah’s Ark coin you’ll find the brilliant image of the narrative in the bible. Noah’s Ark is featured floating atop the flood waters in the middle ground. In the background you can see the sun rising over the peaks of Mount Ararat, while a dove flies into the foreground with an olive branch in its beak.

The obverse face of each coin is struck with the Armenian coat of arms in the center, the mint mark, face value, weight, metal content, and purity directly below. Around the outside rim is the engraving “Republic of Armenia,” which is inscribed in both English and Armenian.

All Silver Armenian Noah’s Ark coins are struck in Germany at a subsidiary firm of Geiger Edelmetalle, which is one of Germany’s oldest operating mint facilities.

If you have questions, please don’t hesitate to reach out to Silver.com. You can contact us on the phone at 888-989-7223, online through our website’s live chat feature, or by submitting your questions to us via email. If you are interested in similar products, be sure to check out our full selection of Silver Armenian Coins.