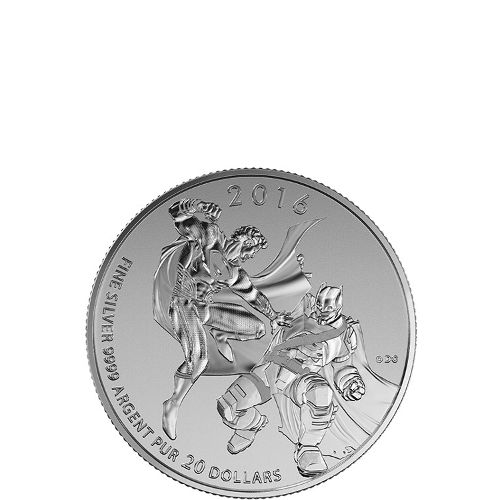 Dawn of Justice chronicles the interaction between Batman and Superman. The heroes of Gotham City and Metropolis, respectively, collide when Batman sees Superman wielding too much power. The clash between the two pits mankind against itself in siding with a hero, and clouds their vision from a new threat emerging.

These particular coins are the only Dawn of Justice-themed silver coins from the Royal Canadian Mint that lack colorization in the design. Nonetheless, the richly detailed design of these coins are among the finest you’ll find on the market today.

On the reverse face of the coin you can see Superman raising his fist to strike Batman, who is featured wearing the bulkier suit of the new Dawn of Justice film. Engravings include the year of issue, metal content, purity, and face value of the coin.

The obverse bears Queen Elizabeth II’s right-profile portrait. Created in 2003 by Susanna Blunt, this depiction of the Queen is the most modern available from the Royal Canadian Mint and includes engravings of Her Majesty’s name, the nation of issue, and the phrase “D.G. Regina.”

Founded in 1908 to cope with precious metal extraction from the Yukon Territories, the Royal Canadian Mint boasted only an Ottawa location until the 1980s. At this point in time the Winnipeg facility was added to cope with increasing demands.

Please feel free to reach out to Silver.com with any questions you might have about these new coins. You can reach one of our team members on the phone at 888-989-7223, online using our live web chat, or via email.