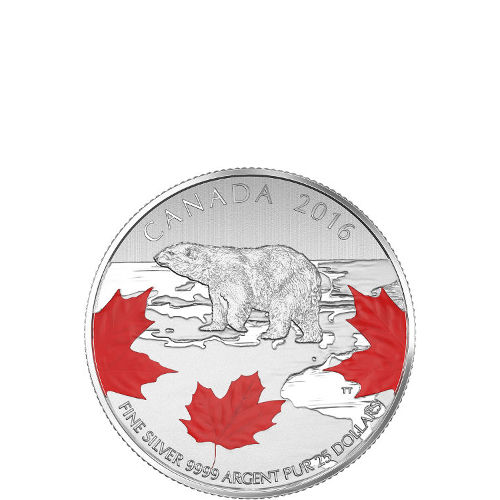 There is no nation in the world that embodies the spirit of the True North more so than Canada. With a diverse landscape that transitions from hills and prairies to massive mountain ranges and vast tundras, Canada truly is a land of many wonders. With its 150th birthday on the horizon, Canada celebrates its confederation with the release of a brand new coin feature iconic images of the nation. Today the 2016 ¼ oz Silver Canadian True North Coin is available for purchase on Silver.com.

Canada celebrates its confederation this year, its landmark steps toward independence from the ruling British Crown. As the nation prepares to pause in celebration, the Royal Canadian Mint has released the 2016 ¼ oz Silver Canadian True North Coin to celebrate iconic images of all things Canada.

Included in the design are an outcrop of the Arctic tundra, the native polar bear that calls this harsh region home, and the national symbol, a maple leaf. The tundra stretches from coast to coast across the northern reaches of Canada, and is one of the most inhospitable locations on the planet.

Canada is home to the vast majority of the world’s polar bear population, with most calling the Arctic Circle and tundras of Canada home. The maple leaf is the official symbol of the Canada, appearing on the national flag and the RCM’s popular Canadian Maple Leaf bullion coins.

The reverse side of each 2016 ¼ oz Silver Canadian True North Coin features a background that comprises the Arctic tundra landmass of Canada, which includes vast inlets and numerous islands. A polar bear is visible astride this landmass, while three red maple leafs fall to the ground in the image.

On the obverse of the coin you’ll find the familiar right-profile portrait of Queen Elizabeth II in use on Canadian currency since 2003. Her Majesty is surrounded by engravings of “Elizabeth II,” “D.G. Regina,” and “Canada.”

Each of these 2016 ¼ oz Silver Canadian True North coins has a specimen finish, which is a unique twist on the standard proof design. We also carry a number of other Royal Canadian Mint Silver Coins that you may be interested in checking out.

If you have any questions, please don’t hesitate to reach out to Silver.com. Our associates are available at 888-989-7223, online using our live chat, and via email.