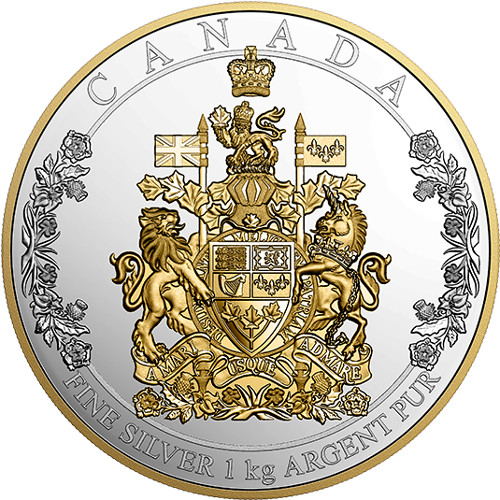 The Royal Canadian Mint often produces coins to celebrate events in the country. In 2017, Canada celebrates its 150th anniversary as a country, but in 2016, the mint decided to honor the 95th anniversary of its official coat of arms with a coin release. Now, you can get the 2016 1 Kilo Proof Silver Canadian Arms of Canada Coin at Silver.com.

The obverse of each 2016 1 Kilo Proof Silver Canadian Arms of Canada Coin features Susanna Blunt’s 2003 depiction of Queen Elizabeth II. This same image has been used on all modern Canadian coinage since 2004. The Queen is shown in right-profile. On this coin, her image is gilded with gold, as is the outside edge of the coin. Engravings on this side of the coin include the Queen’s name, the coin’s face value, “D.G. Regina,” and the coin’s year.

On the reverse of each coin, you will see Canada’s Coat of Arms. The design was created by Cathy Bursey-Sabourin and Fraser Herald from the Canadian Heraldic Authority. The design is a shield being held by a lion and unicorn. The lion is holding the flag of the United Kingdom, while the unicorn holds the royal flag of France. At the top of the design, another lion stands atop a platform with a crown on its head. A number of maple leaves are incorporated into the design. The main design on the reverse is also gilded in gold.

The shield in Canada’s Coat of Arms has five different sections. The top left corner represents the three royal lions of England, while the upper right has the royal lion of Scotland. The middle two sections display the harp of Ireland and the royal fleurs-de-lis of France. The bottom section holds three maple leaves.

If you have any questions, please don’t hesitate to ask. A Silver.com associate is available to help at 888-989-7223, online using our live web chat, or via our email address.