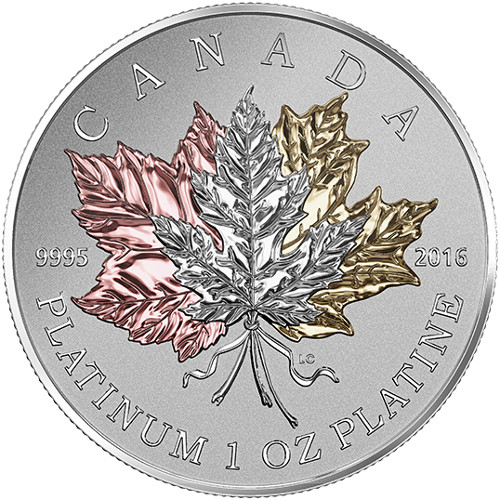 The Canadian Maple Leaf coin series from the Royal Canadian Mint is among the most popular coins released on an annual basis. Numismatists eagerly anticipate the annual release of the stunning coins each year, and have a great deal of variety to choose from with the coin available in four metals and countless weights. Right now, the 2016 1 oz Platinum Canadian Maple Leaf Forever Reverse Proof Coin is available to purchase online at Silver.com.

On the reverse of the 2016 1 oz Platinum Canadian Maple Leaf Reverse Proof Coin is the image of those three leaves, with selective gold plating used to depict the leaves in different times of year. The center leaf is engraved in silver, while the left has a pink gold plating to depict the red maple leaf in autumn. The leaf to the right is the sugar maple leaf with yellow gold plating to bring out the beautiful golden hues of autumn.

The obverse of all Platinum Canadian Maple Leaf Reverse Proof Coins in this collection feature the right-profile portrait of Queen Elizabeth II. Her Majesty’s image was created in 2003 by Susanna Blunt and has occurred on Canadian coinage since 2004.

If you have any questions, please don’t hesitate to contact Silver.com. Our customer service team is available at 888-989-7223, online through our live chat, and via our email address.