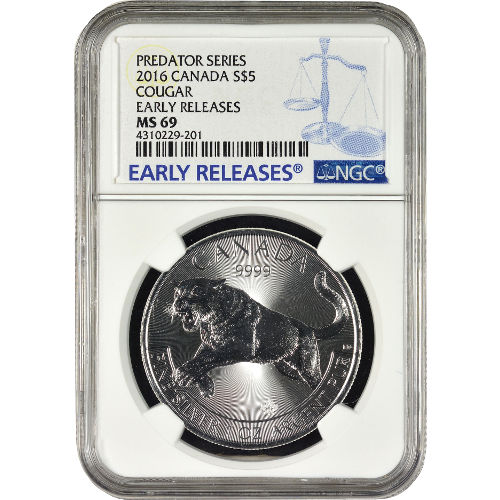 Announced at the World Money Fair in Berlin, Germany in February 2016, the all-new Predator Series is a bullion coin program from the Royal Canadian Mint boasting a purity level of .9999 fineness. The four-coin series will depict different natural predators from across Canada, and launches in 2016 with the cougar as the introductory animal. Right now, the 2016 1 oz Silver Canadian Cougar Predator Series Coin is available on Silver.com.

Emily Damstra made a splash designing Royal Canadian Mint coins in 2013 when she took over the design of Canadian Wildlife Series coins. The final two coins in that six-coin series were created by Damstra, and so beloved that Damstra was tapped to create the designs for the four-coin Birds of Prey Series.

The 2016 1 oz Silver Canadian Cougar Predator Series coin in this listing has a near-perfect certification from the NGC. MS69 coins exhibit full, original mint luster and a maximum of two minor detracting flaws on the surface.

As an Early Release coin, these Predator Series coins had to meet certain standards. To earn the label, these coins had to arrive at the NGC depository or an NGC-approved depository within the first 30 days of the release date set by the Royal Canadian Mint.

The reverse face of the coin features the full-length figure of a cougar as it attacks. Engravings identify the nation of issue, purity, metal content, and weight. The RCM’s radial lines and micro-laser engraved maple leaf privy mark are featured on these coins.

On the obverse is the image of Queen Elizabeth II, created by Susanna Blunt. This 2003 depiction is encircled by engravings of her name, the coin’s face value, the phrase “D.G. Regina,” and the year of issue for the coin.

Please direct any questions you have to a Silver.com associate. You can reach out team members on the phone at 888-989-7223, online using our live chat, and via email.