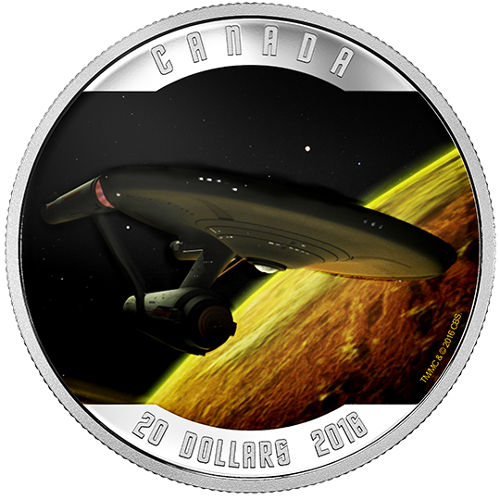 The U.S.S. Enterprise is not a modern American warship, but rather, a futuristic starship from the fictional Star Trek universe created in 1966 by Gene Roddenberry. His fictional universe took decades to catch on, but its debut came exactly 50 years ago, and the Royal Canadian Mint is marking the occasion with a series of exciting commemorative silver coins. Right now, the 2016 1 oz Silver Colorized Canadian Star Trek Enterprise coin is available on Silver.com.

Roddenberry’s Star Trek universe debuted with the release of The Original Series in 1966. Starring William Shatner as Captain James T. Kirk and Leonard Nemoy as Spock, the series was on-air from 1966 to 1969, and was eventually cancelled due to low ratings. The Star Trek legacy was far from dead though, gaining a cult following when it was released to syndication in reruns.

The central figure of all the series that followed, including 13 feature films and a several television series to follow, was the U.S.S. Enterprise. It served as the central starship used in the Star Trek universe for years.

On the reverse face of the 2016 1 oz Silver Colorized Canadian Star Trek Enterprise Coin you’ll find the colorized image of the U.S.S. Enterprise as it traverses the universe, passing close by to a planet. The scene depicted on the coin comes directly from a 1968 episode entitled I, Mudd.

The obverse face of the coin includes the right-profile portrait of Queen Elizabeth II. Created in 2003 by Susanna Blunt, it is accompanied by the engravings of “Elizabeth II” and “D.G. Regina.”

Each 2016 1 oz Silver Colorized Canadian Star Trek Enterprise coin in this listing has a beautiful proof finish, and ships from the Royal Canadian Mint in its classic maroon clamshell. The clamshell itself ships inside of a Star Trek­-themed graphic shipping box.