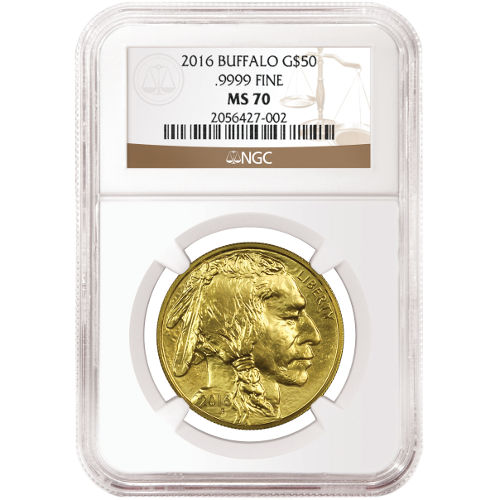 All 2016 1 oz Gold American Buffalo coins available now through this Silver.com listing are considered perfect specimens. These coins earned a grade of Mint State 70 from the NGC, indicating that each has its full, original mint luster and lacks any kind of detracting flaws or blemishes on its surface.

The United States Mint resurrected yet another iconic American coin design when it introduced the Gold American Buffalo. Not only was this coin the first in US Mint history to feature .9999 fine gold, it included imagery found on the popular Buffalo Nickel from James Earle Fraser, which was in circulation from 1913 to 1938.

Fraser’s design featured a Native American chieftain profile on one face of the five-cent piece, and was inspired by the combination of facial features from three real-world tribal leaders of the early 20th century. Black Diamond, a resident bison at the Central Park Zoo in the early 1900s inspired his reverse design.

On the obverse of 2016 Gold American Buffalo is the image of Fraser’s Native American chieftain, which is set in right-profile relief. As with the original five-cent piece, the only engraving on this face is the word “Liberty.”

The reverse face of the coin features the image of Black Diamond, just as it was on the Buffalo Nickel. The bison, North America’s largest land mammal, is surrounded by engravings of the coin’s weight, purity, metal content, and face value.