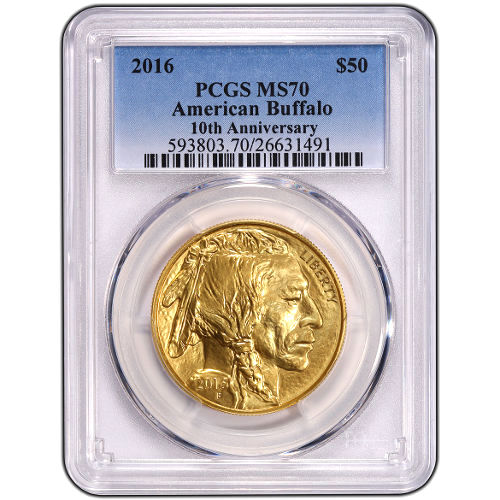 James Earle Fraser was an American artist and sculptor who was born in Winona, Minnesota, and grew up on the prairies and grasslands of the American Midwest. His upbringing inspired many of the designs he would create during his lifetime, including the Buffalo Nickel for the United States Mint.

Commissioned by the administration of President William H. Taft, Fraser redesigned the nation’s five-cent piece with stunning imagery reminiscent of his upbringing in the Midwest. His Native American profile portrait was inspired by the facial features of actual tribal leaders, and the bison that once dominated the frontiers adorned the reverse of his nickel.

Today, Silver.com offers the 2016 Gold American Buffalo coin as a perfect specimen, according to the PCGS. Each coin has its full, original luster from the mint and lacks any detracting flaws on the surface.

On the reverse you’ll find Fraser’s image of Black Diamond, the bison who inspired his original design. The obverse bears the right-profile portrait of a Native American chieftain. Both images appeared on the Buffalo Nickel throughout its production history.

The Gold American Buffalo was introduced in 2006 by the US Mint, making these coins part of the 10th anniversary striking. The Gold Buffalo bullion coin is the first in American history struck using .9999 fine gold.

If you have questions, please don’t hesitate to reach out to us. Silver.com associates are available at 888-989-7223, online using our live chat, and via email.