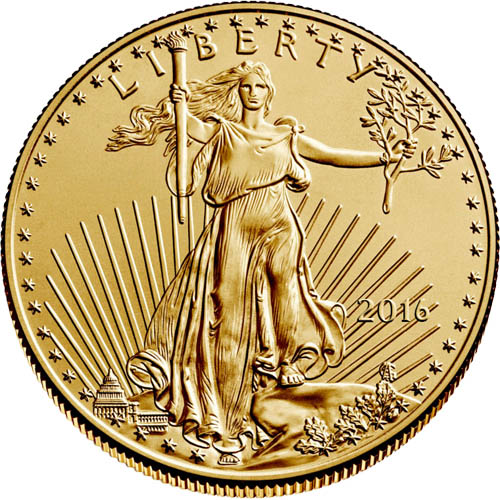 One of the most visible coin programs from the United States Mint is the Gold American Eagle. The nation’s official gold bullion coin, these products are struck on an annual basis in three different versions and four different weights, attracting investors, collectors, and exhibitors alike with its beauty. Right now, Silver.com proudly offers the 2016 1 oz Gold American Eagle coin in Brilliant Uncirculated condition.

Each Gold American Eagle coin bears the image of Lady Liberty created by Saint-Gaudens in 1907. Saint-Gaudens was an Irish-American sculptor born in Dublin to a French and Irish parents who later moved to New York City. He was chosen by President Theodore Roosevelt in 1905 to spearhead the change in American gold coin design, but died in 1907 before his greatest design (Lady Liberty) ever appeared on a coin.

The obverse of all Gold American Eagle coins features a full-length figure of Lady Liberty. With a torch in her right hand and an olive branch in her left, she is shown walking confidently forward into an unknown future, representing the bold and progressive march of the United States at that time.

On the reverse of these 2016 1 oz Gold American Eagle coins is sculptor Miley Busiek’s depiction of a family of nesting bald eagles. Busiek is a well-respected artist and sculptor in the US, and works with materials ranging from bronze and steel to cast stone and other media.

Gold American Eagles are now struck by the United States Mint entirely at its West Point Mint facility. Each of these coins is in BU condition, indicating that there are no signs of wear and tear.

If you have questions for a Silver.com associate, feel free to call us toll free at 888-989-7223. You can also connect with us online using our live web chat or email address. If you are looking for similar products, be sure to check out our selection of Gold Canadian Coins.