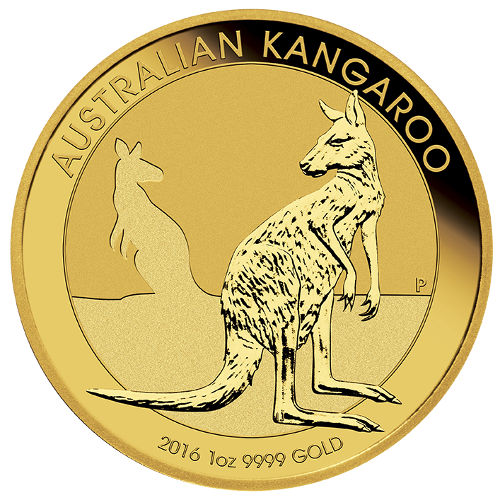 Among the many native creatures that are easily associated with the Australian continent, none is more beloved and graceful than the kangaroo. The world’s largest marsupial, the kangaroo has featured on numerous commemorative coin series from the Land Down Under. Today, Silver.com offers the all-new 2016 1 oz Gold Australian Kangaroo Coin in Brilliant Uncirculated condition.

The kangaroo is one of the world’s most unique species of animal. A native species to the continent of Australia, the kangaroo was first discovered by European explorers at the end of the 18th century. These beautiful creatures are immensely powerful, propelling themselves across the Outback on muscular hind legs, and maintaining their balance in motion with an oversized tail.

In Australia, the kangaroo is the largest marsupial on a continent that has a number of unique marsupial species, including the koala and wallaby. While most outsider think of kangaroos as representative of one species, there are in fact four subspecies of kangaroo on the continent.

The reverse side of each coin features the image of a singular kangaroo standing in the foreground, looking back over its shoulder. In the background, a distant silhouette depicts a second kangaroo. Engravings include “Australian Kangaroo” and the coin’s weight, metal content, and purity.

On the obverse is the image of Queen Elizabeth II. This image is the fourth iteration of Her Majesty, and was designed in 1988 by Ian Rank-Broadley. The same image appears on coins minted in the United Kingdom, but is due to be replaced in 2016 by an updated portrait of the Queen.

Australia’s Perth Mint is the oldest operating facility in the country. A state-owned entity of the government of Western Australia, the Perth Mint was the final addition to the colonial Royal Mint system, and its coins enjoy status as legal tender thanks to Australia’s Currency Act of 1965.

If you have any questions, Silver.com associates will be happy to answer them. You can reach out team members on the phone at 888-989-7223, online using our live web chat, or simply submit your questions via email. If you are interested in similar products, be sure to check out our full selection of Perth Mint Gold Kangaroos.