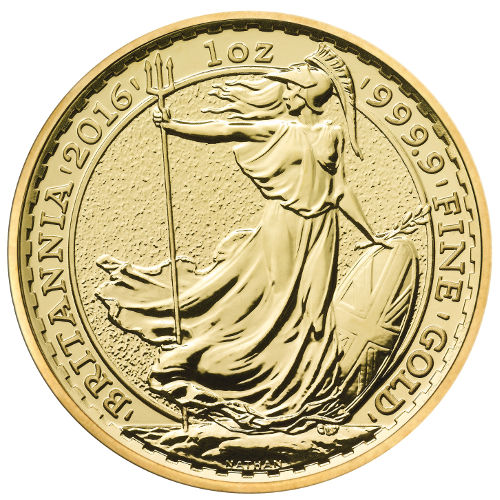 The United Kingdom’s Gold Britannia coin reaches deep into the history of the British Isles for a symbol that has represented the nation and the people of Britain for more than two-thousand years in European culture. Featured every year on the reverse of Gold Britannia coins, the latest bullion coin is now available on Silver.com. The 2016 1 oz Gold British Britannia is available at this time in Brilliant Uncirculated condition.

Britannia is an image and term that dates back to Roman occupation of the British Isles. The Romans used the term Britannia to refer to the islands of Britain and Ireland collectively, as well as an identifier of the citizens of the area. Britannia also took on the personification of a goddess that protected the islands from outsiders.

On the reverse face of all 2016 1 oz Gold British Britannia coins is the image of Britannia, with her helmet, trident, and shield in hand. Her imagery is meant to represent guardianship over the British Isles, with a trident to master the seas and a Union Jack-emblazoned shield to defend against invasion.

The obverse features the latest, fifth-generation portrait of Queen Elizabeth II. Designed in 2015 by Jody Clark, the new portrait replaces Ian Rank-Broadley’s 1998 design of Her Majesty, and makes Clark (33) the youngest to design an image of the Queen for British coinage.

Each Gold British Britannia in this listing is in Brilliant Uncirculated condition. BU coins have no wear and tear visible, but may feature breaks in the luster, spotted surfaces, or contact marks on the surface.

Please direct all of your questions to a Silver.com associate at 888-989-7223, or reach out to us online using our live chat and email services. If you are looking for similar products, be sure to check out our collection of Gold British Coins.