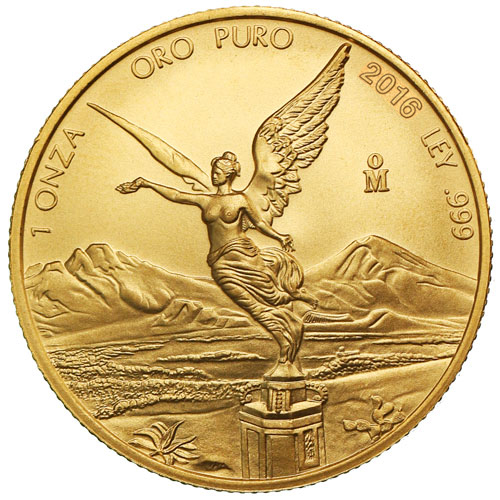 The Gold Mexican Libertad is more than just the official gold bullion coin of Mexico. It is a direct descendant of the nation’s historic gold Centenario coin, and features some of the most important symbols in Mexican history. Today, the 2016 1 oz Gold Mexican Libertad Coin is available to you online at Silver.com.

Gold Mexican Libertad coins were produced in 1981 for the first time, but discontinued twice. The first time was from 1982 until 1991, when the coin was introduced again in a 1 oz. weight and four fractional weights. From 1995 to 1999 the coins were again discontinued, with a one-year production in 2000 followed by another halt in 2001.

All 2016 1 oz Gold Mexican Libertad coins listed here online at Silver.com are available in BU condition. Coins in BU condition show no signs of wear and tear, though you may notice a range of minor flaws including breaks in the luster, spotted surfaces, and contact marks from striking the blanks at the mint.

On the obverse of the Gold Mexican Libertad coin is the image of Winged Victory, which dominates the center of the design field and is framed in the background by the twin volcanic peaks of Popocatepetl and Iztaccihuatl, which are named for a pair of Ancient Aztec lovers.

The reverse of all 2016 1 oz Gold Mexican Libertad coins includes the modern coat of arms for Mexico in the center of the design field, with surrounding images of all 10 historic versions of the seal used by the nation since 1821.

Founded in 1535, the Mexican Mint is the oldest operating facility in the Western Hemisphere. The mint is controlled today by the federal government of Mexico as its sovereign mint and operated by Banco de Mexico.

Please direct your questions about Gold Mexican Libertad coins to Silver.com customer service. Our team is available on the phone at 888-989-7223, online using our live chat, and via our email address.