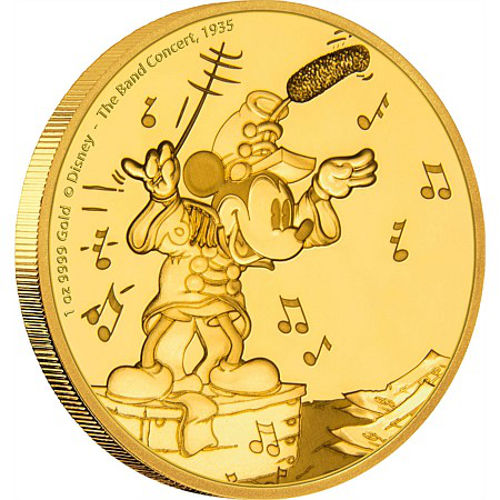 The New Zealand Mint is one of the world’s best refiners of gold and silver coins, and its character series are among the most popular in the market right now. One of the most sought-after products from the mint is its lineup of Disney-themed coins, more specifically the Mickey Through the Ages Series. Right now, the 2016 1 oz Niue Gold Mickey Mouse The Band Concert Series coin is available on Silver.com.

Mickey Mouse is the most popular character from Walt Disney’s mind, and first appeared in the animated short Steamboat Willy. In its Mickey Through the Ages series, the New Zealand Mint releases a new image of Mickey Mouse on the reverse of different coins in the program.

On the reverse of the coin you’ll find the image of Mickey Mouse dressed as the bandleader from The Band Concert. In the animated short, Mickey conducts a band through a performance of the William Tell Overture, but is continually interrupted by Donald Duck. Desperate to participate in the performance, Donald plays the incorrect “Turkey in the Straw” and distracts the other members of the band.

Each reverse design of the coin includes the image of Mickey dressed up as the bandleader. He is featured standing atop a soapbox as he attempts to conduct the band. You’ll notice musical notes floating around his character, with sheets of music lying on the ground.

The obverse of each 2016 1 oz Niue Gold Mickey Mouse The Band Concert Series coin has the right-profile portrait of Queen Elizabeth II. This image was created in 1998 by Ian Rank-Broadley, who developed the portrait as the fourth-generation image of Her Majesty.