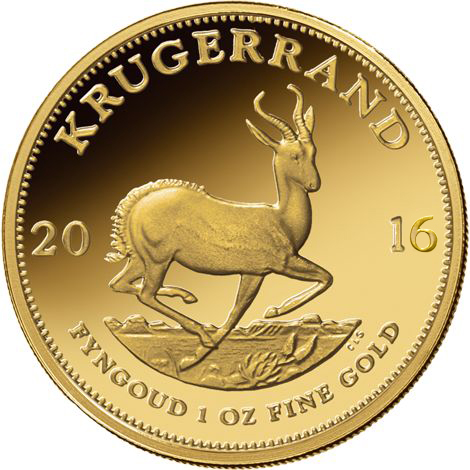 By 1980, the South African Krugerrand had become the single most popular gold coin in the world, accounting for 90% of sales in the global gold coin market. Even the Western boycott of South African goods as a result of its apartheid system couldn’t dent the popularity of the Krugerrand.

The coin was so named as a combination of the nation’s official currency, the South African Rand, and its first president of the old South African Republic, Paul Kruger. The Gold South African Krugerrand remained the sole gold bullion coin in the global marketplace until 1979 when the Royal Canadian Mint introduced the Gold Canadian Maple Leaf.

On the obverse of the Krugerrand is the left-profile portrait of Paul Kruger, who was a native Boer of South African descent. His portrait is encircled by the engraving of the state name in both English “South Africa,” and Afrikaans “Suid Afrika.”

The reverse features the national emblem of South Africa, the native Springbok antelope, one of the continent’s fastest land mammals. Its image is surrounded by the word “Krugerrand” above, the year of issue split on either side of the antelope image as “20 – 16,” and the coin’s metal content and weight.

Each of these Gold South African Krugerrand coins is available today in Brilliant Uncirculated condition, indicating that each has no signs of wear and tear. BU coins might, however, exhibit breaks in the luster, spotted surfaces, or contact marks as a result of the striking process.

If you have any questions about these products from the South African Mint, please don’t hesitate to ask. You can reach Silver.com associates at 888-989-7223, connect with us online using our live chat, or send us an email.