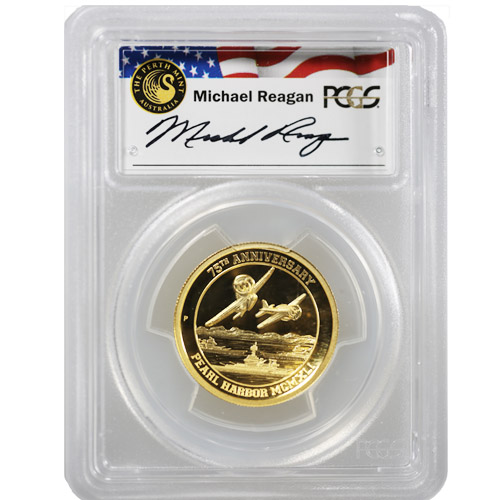 The United States had managed to maintain its neutrality in World War II through the first two years of the conflict. The US had been reluctantly dragged into World War I, and after the horrors of the war, the American public longed to stay out of complicated foreign entanglements in the Old World. On December 7, 1941, Imperial Japan’s unprovoked, surprise attack on the US Naval Station at Pearl Harbor in Hawaii dragged the United States into yet another complex global conflict. Today, 2016 1 oz Gold Tuvalu Pearl Harbor Coins are available to you online at Silver.com in perfect condition.

The intent of the Japanese attack on a neutral America, a nation it was not formally at war with at the time, was to prevent the United States Navy from intervening on behalf of its allies in the Pacific. In addition to the attack on Pearl Harbor, Japan had planned attacks on British and Dutch colonial interests in the Pacific to secure the resources it needed to continue its war in mainland China.

All of the 2016 1 oz Gold Tuvalu Pearl Harbor Coins available here come with a perfect certification. A PR70 coin has full, original mint luster with no detracting flaws of any kind present on the specimen. The included DCAM identification indicates a specimen that has beautiful contrast between its strong, frosted designs and deeply-mirrored, clear fields.

On the obverse of 2016 Gold Tuvalu Pearl Harbor Coins is an effigy of Queen Elizabeth II. Designed in 1998 by Ian Rank-Broadley, this right-profile portrait of Her Majesty includes the Girls of Great Britain and Ireland Tiara. Though retired by the Royal Mint in 2016 and Australian coins from the Perth Mint in 2018, it is still in use on Perth Mint coins issued for nations such as Niue and Tuvalu.

The reverse design of 2016 1 oz Gold Pearl Harbor Coins features the image of two Japanese fighter aircraft. These planes are flying low into Pearl Harbor as they launch a surprise attack on the United States.