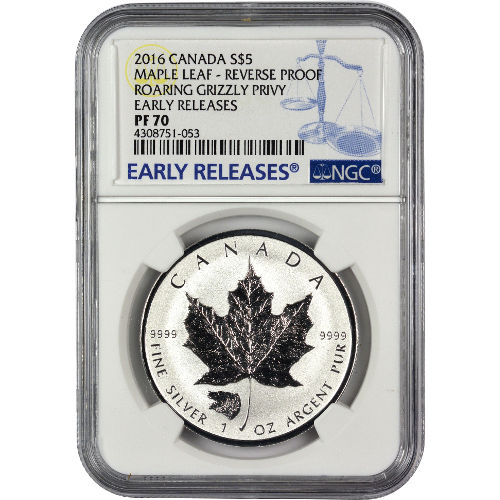 Any quantity available for $129.00 per coin over spot!

Wild Canada is an all-new series of Silver Canadian Maple Leaf coins featuring privy marks. Each coin in the planned six-coin series will represent an original coin design from the Canadian Wildlife Series.

The Canadian Wildlife Series debuted in 2011, and featured two releases annually through 2013. Each coin depicted a different native species from North America. Those same animals will appear as privy marks on Silver Canadian Maple Leaf coins in the Wild Canada Series.

Each of the 2016 Grizzly Bear Silver Canadian Maple Leaf coins in this product listing has a perfect Proof 70 grade from the NGC. Coins with a perfect grade have full, original luster from the mint and bears no detracting flaws of any kind. As reverse proof specimens, these coins have strong, frosted backgrounds and a deeply-mirrored finish on the design set.

The Early Release designation used on these coins is assigned by the NGC. In order to qualify, coins must arrive at the NGC or an approved depository within 30 days of the release date set by the Royal Canadian Mint.

On the reverse of each coin is the grizzly bear privy mark, which features just the head of a bear, below the Silver Canadian Maple Leaf design. The obverse depicts Queen Elizabeth II in right-profile relief, and was created in 2003 by Susanna Blunt.

Please direct any questions you might have about these coins to a Silver.com customer service representative. You can reach our team members on the phone at 888-989-7223, online using our live web chat, and via our email address.