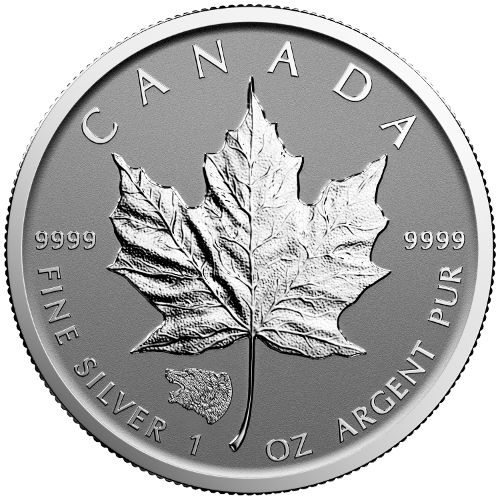 Any quantity available for $9.99 per coin over spot!

Over the past decade, the Royal Canadian Mint has lead the way among government mints with innovative coin designs and series. The RCM continues that trend with the continuation of the Wild Canada series – a 6-coin series commemorating the original Canadian Wildlife series.

Each release in this series features a reverse proof finish on the Maple Leaf design, including a special privy mark matching the original 6-coin Wildlife series. The Wild Canada series began with the Wolf Privy Maple Leaf, and continues with this Grizzly Privy, then a Cougar Privy, Moose Privy, Antelope Privy, and finally a Bison Privy to conclude the series.

Privy marks on the Silver Canadian Maple Leaf coins released in recent years have been wide ranging, and include London’s Tower Bridge (2009), the Leaning Tower of Pisa (2012), and the Titanic (2012). Each of the coins in this product listing features a special grizzly bear privy mark, honoring one of the country’s most prominent wildlife species.

On the reverse side of each 2016 Grizzly Privy Silver Canadian Maple Leaf is the iconic sugar maple leaf in the center, with a small grizzly bear privy to the bottom left of the image. The micro-laser engraved radial lines and maple leaf, added in 2015, are also featured on this side of the coin.

The obverse side of all RCM products features Queen Elizabeth II in right-profile relief. Created in 2003 by Canadian artist Susanna Blunt, this is the third generation image of Her Majesty to appear on Royal Canadian Mint coinage. Each of these coins is in Brilliant Uncirculated condition, indicating a lack of wear and tear. However, you may notice breaks in the luster or spotted surfaces.

The Royal Canadian Mint is headquartered in Ottawa, the national capital, and operates a secondary facility in Winnipeg. The RCM was founded in 1908 in response to the influx of precious metals from the Yukon Territories.

If you have any questions, please reach out to Silver.com at 888-989-7223, chat with us online, or submit your questions via email. If you are looking for similar products, be sure to check out our selection of Silver Coins.