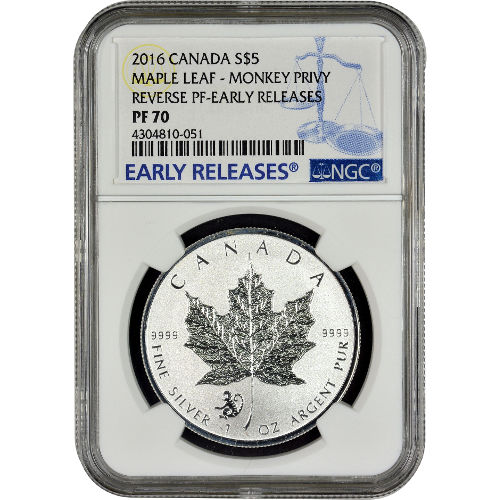 Each of these 2016 Monkey Privy Silver Canadian Maple Leaf coins is a perfect PF70 according to the NGC. Coins with this certification exhibit full, original mint luster and are devoid of any detracting flaws, such as contact marks, hairlines, or blemishes.

As an Early Release product, these coins had to meet certain criteria to earn the designation. For the NGC to issue this designation, the coins had to arrive at an NGC depository or approved facility within the first 30 days of the release date as set by the Royal Canadian Mint.

On the reverse of each coin you’ll find the sugar maple leaf, the official emblem of the nation of Canada. The Monkey Privy is featured to the lower left of the maple leaf design, and depicts a playful monkey in left-profile relief.

The obverse of the coin bears the image of Queen Elizabeth II. Created in 2003 by Susanna Blunt, a Canadian artist, it is the third generation image of the Queen on Silver Canadian Maple Leaf coins since their 1988 introduction.

Founded in 1908, the Royal Canadian Mint quickly became one of the world’s leading producers of high-quality silver and gold bullion products. Today it has two facilities, in the federal capital of Ottawa and a newer facility in Winnipeg.

If you have any questions, please feel free to reach out to us at 888-989-7223. You can also chat with us live online or email your questions to us.