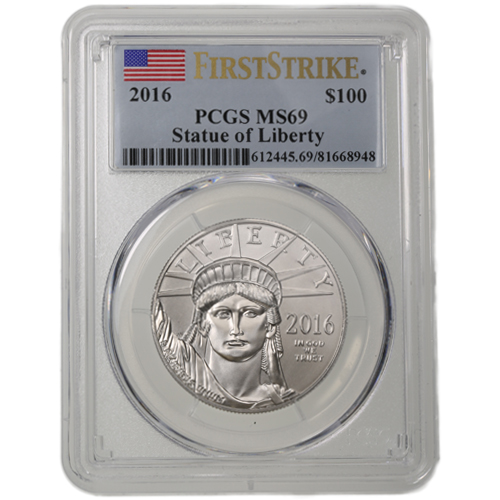 The onset of the Great Recession in 2008, coupled with immense increases in demand for the Silver American Eagle pushed the Platinum Eagle bullion coin to the sidelines in production at the US Mint. From 2009 to 2013 there were no bullion versions of the Platinum American Eagle struck.

This occurred again in 2015 after the coin’s 2014 return, but this had more to do with the lack of planchets for striking the coins. Platinum’s value has risen immensely in recent years, but this is due largely to the increased use of platinum in other industries, which pinches the supply for precious metal production.

On the obverse of the 2016 1 oz Platinum American Eagle coin is the image of the Statue of Liberty’s face as she gazes off into the distance. Created in 1997 by John Mercanti, US Mint Chief Engraver, this image is surrounded by engravings of “Liberty,” “In God We Trust,” and “2016.”

The reverse design comes from Thomas D. Rogers, and was also created in 1997. It features an American bald eagle as it flies over the Earth while the rising sun appears in the background. This is the only design to feature on the bullion and proof versions of the coin in the same year, with proof coins featuring a new design each year.

All 2016 1 oz Platinum American Eagle coins in this listing earned Mint State 69 grades from the Professional Coin Grading Services. Coins in this condition exhibit full, original mint luster and include a maximum of two minor detracting flaws located outside the primary focal areas of the coin.

If you have questions, don’t hesitate to ask. Silver.com associates are available on the phone at 888-989-7223, online using our live web chat, and via our email address.