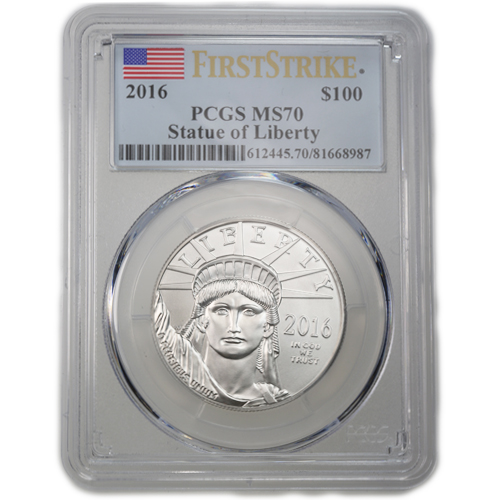 Nothing adds value to a coin faster than a perfect certification from one of the world’s two most important certification companies. The Platinum American Eagle coin already has a great deal of value in the eyes of investors and collectors, and now there are 2016 specimens available with perfect grades. Right now, the 2016 1 oz Platinum American Eagle Coin is available on Silver.com.

The Platinum American Eagle coin is unlike any other from the United States Mint. On the one hand, it is the only bullion coin program from the mint to feature a new design on the reverse side of one of its coins each year. This honor goes to the proof version of the Platinum Eagle.

On the down side, the Platinum American Eagle bullion coin is the only one from the mint to ever have its production suspended due to supply shortages. Because platinum is used in a variety of other industries, including automotive and dentistry, the mint has had to forgo production of the bullion coins in favor of proof between 2009 and 2013, and again in 2015.

Each 2016 1 oz Platinum American Eagle coin in this product listing from Silver.com has a perfect certification from the PCGS. Coins with an MS70 grade have full, original luster from the mint and bear no detracting flaws of any kind on the surfaces.

The obverse of each coin features the bold image of the Statue of Liberty, which his focused on her head as she gazes off into the distance. “Liberty,” “2016,” and “In God We Trust” are all engraved on this face.

On the reverse of the 2016 1 oz Platinum American Eagle coin is the image of a bald eagle flying over the Earth as the sun rises in the background. “United States of America,” “.9995 Platinum 1 oz.,” and the coin’s face value of “$100” are all engraved on this side.