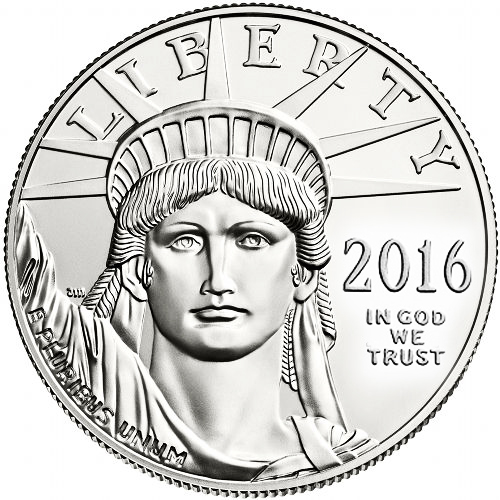 Platinum American Eagle coins are produced in a much different manner between the bullion version in this listing and the proof coins. Only 1997 saw the obverse and reverse designs feature the same imagery on the bullion and proof. The proof version of the coin is the only major bullion coin program from the US Mint with new designs each year.

Bullion Platinum American Eagle coins feature the same designs each year. The 2016 1 oz Platinum American Eagle Coins in this offering are Brilliant Uncirculated specimens. BU coins have no signs of wear and tear, but may feature minor flaws including breaks in the luster, spotted surfaces, and contact marks from the coining process.

On the reverse side of the 2016 1 oz Platinum American Eagle Coin you’ll find the image of an American bald eagle in flight with its wings spread wide over the rays of the sun. This image was created by Thomas D. Rogers, an engraver of the United States Mint and creator of two further designs used in the reverse of the proof coins in the future.

The obverse side of all Platinum American Eagle coins includes the image of the Statue of Liberty’s head, focused intently on her eyes as they gaze off into the future. This image was created in 1997 by then-Chief Engraver of the United States Mint, John Mercanti. His other images include the heraldic eagle used on the reverse of the massively popular Silver American Eagle coin.

The United States Mint makes the Platinum American Eagle coin available for just the third time since 2008. The coins were available in bullion from 1997 to 2008, with a hiatus forced by the demand for silver and gold at the start of the Great Recession in 2008.

Please feel free to reach out to Silver.com with any questions about the Platinum American Eagle coin. You can reach us on the phone at 888-989-7223, connect with us online using our live web chat, and via our email address.