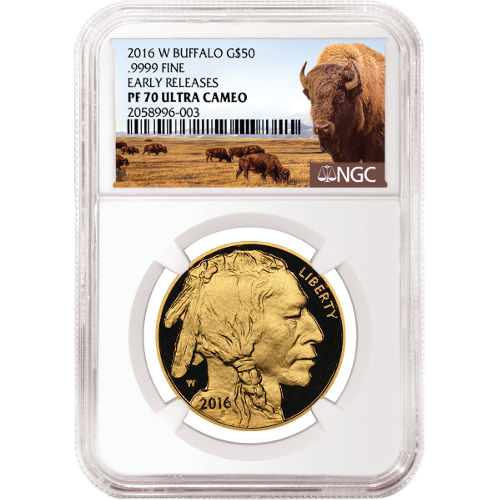 James Earle Fraser’s Buffalo Nickel design debuted on the nation’s five-cent piece in 1913 as part of a broader movement at the US Mint to modernize and refine its coinage designs. Fraser’s Buffalo Nickel was in circulation from 1913 to 1938, and featured the compilation of various tribal leader’s facial features in one right-profile portrait on the obverse and a bison on the reverse.

The 2016 1 oz Proof Gold American Buffalo coins in this Silver.com listing have perfect grades from the NGC. PF70 specimens exhibit full, original luster from the mint and have no detracting flaws on the surfaces.

Early Release coins earn their designation based upon their arrival at the NGC or an approved NGC depository. The United States Mint must ship the coins in US Mint boxes within the first 30 days of the release date it sets for annual coins in order for a product to earn the Early Release label.

On the coin’s obverse face you’ll find that right-profile portrait of a fictitious Native American leader, complete the word “Liberty” in the design. The reverse face of the 2016 1 oz Proof Gold American Buffalo coin has the image of a bison, creatures that were critical to the survival of many tribes from the plains of western America.

Please feel free to contact Silver.com with any questions you might have about these Gold American Buffalo coins. You can reach us at 888-989-7223, chat with us live online, or email us.