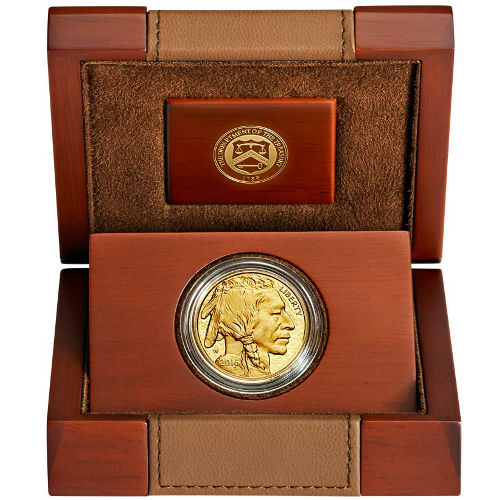 With your purchase of a 2016 1 oz Proof Gold American Buffalo coin from Silver.com today, you’ll receive the purest gold proof coin from the United States Mint in a commemorative box that is perfect for displaying your favorite precious metal coin. Included with your purchase is a Certificate of Authenticity which verifies the validity of your product from the US Mint.

On the obverse face of the coin is the right-profile portrait of a Native American tribal leader, along with an engraving of the word “Liberty.” Fraser used a combination of facial features from three different real-world tribal leaders in the early 20th century to create his famous Buffalo Nickel obverse design.

The reverse of the 2016 1 oz Proof Gold American Buffalo coin features the image of a wild buffalo. This depiction was inspired by Black Diamond, a bison housed at New York City’s Central Park Zoo at the turn of the 20th century.

For many Native American tribes from the Western Plains, the buffalo made the difference between life and death. Tribes in this region often migrated to follow the seasonal paths of the buffalo, ensuring access to food (meat), clothing (pelts), and shelter (skins and bones) courtesy of the bison.

If you have any questions about these 2016 1 oz. Proof Gold American Buffalo coins, don’t hesitate to ask. A Silver.com associate is available at 888-989-7223, online using our live web chat, or via email.