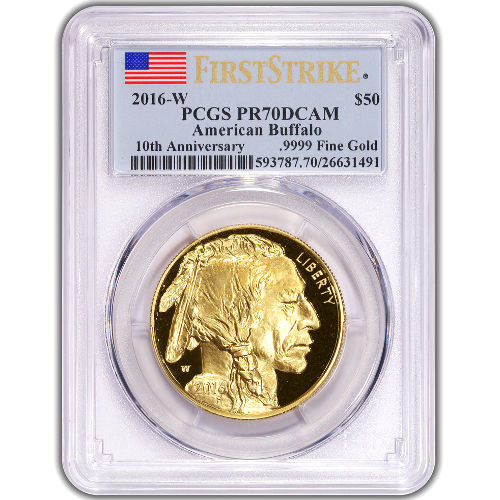 Each 2016 1 oz Proof Gold American Buffalo in this listing has a perfect PR70 grade from the PCGS. Coins in this condition exhibit full, original mint luster and lack all detracting flaws. The deep-cameo finish, or DCAM, is reserved for proof coins with a stark contrast between the design set and background field.

DCAM coins have a strong, frosted matte finish on the design set, and a contrasting deeply-mirrored, clear background field. These differing finishes give the image the impression of floating above the coin’s surface.

The First Strike designation gives this coin a special status. It signifies that it was received by the PCGS for certification within the first 30 days of the release date the US Mint set for its 2016 1 oz. Proof Gold American Buffalo coins.

On the obverse of the 2016 1 oz Proof Gold American Buffalo you’ll find the image of Fraser’s Native American leader. He crafted this tribal leader’s image by combining the facial features and characteristics of three tribal elders alive during the early 20th century.

The reverse face of the coin bears a depiction of Black Diamond, a popular resident bison at New York City’s Central Park Zoo in the early 20th century. Bison used to number in the millions on the North American continent, but plummeted during the 18th and 19th centuries. Today there are some 30,000 wild bison and 300,000 more in herds on farms.

If you have any questions, please contact Silver.com at 888-989-7223. You can also reach us online using our live chat and email features.