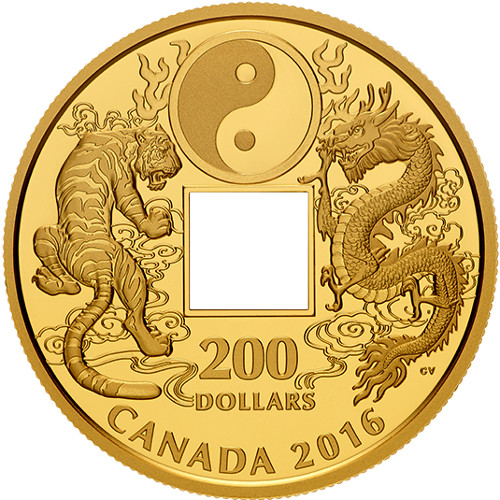 Chinese history tells many tales of animals in the human world, and two of the most commonly used are the tiger and the dragon. These animals are mentioned in Chinese myth, astrology and astronomy. Now, the two animals come together on one coin from the Royal Canadian Mint. Get the 2016 1 oz Proof Gold Canadian Tiger and Dragon Yin and Yang Coin from Silver.com.

These coins have a unique square cut-out feature, which is a first for the Royal Canadian Mint on a gold coin. The hole is common in traditional Chinese minting. It represents the Earth and the landmass of China.

On the obverse of each 2016 1 oz Proof Gold Canadian Tiger and Dragon Yin and Yang Coins, you will find the effigy of Queen Elizabeth II. For this coin, it has a unique finish. Since it had to be made smaller, it is now above the hole in the coin in a polished, smooth circle. As always, she is looking to the right. Susanna Blunt designed this image in 2003.

Above the Queen’s image, you can see her name. Around the hole, there is a phoenix design. Under the hole is the phrase “D.G. Regina.”

The Royal Canadian Mint was founded in 1908 as the sovereign mint of the country. The original facility was opened in Ottawa, but a second location opened in the 1980s in Winnipeg to help raise the minting capabilities of the mint.