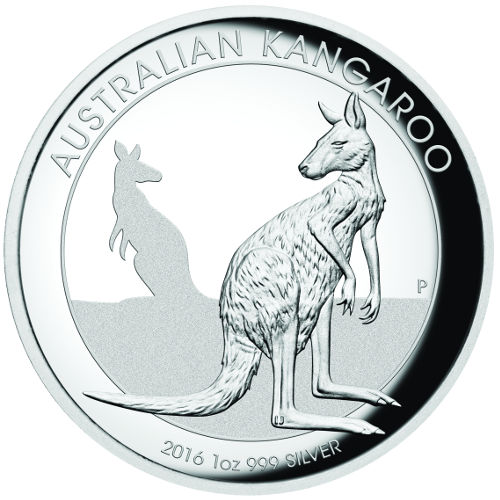 One of the iconic images in the history of Australian coinage is the kangaroo. Routinely featured on circulation currency and commemorative coinage alike, the kangaroo is more than just a design, it’s a national symbol. The Perth Mint recently introduced a new bullion series featuring the kangaroo, but an old favorite also returns in 2016. Right now, the 2016 1 oz Proof Silver Australian Kangaroo Coin is available on Silver.com.

The kangaroo is the largest species of marsupial in the world, and despite decreases in its population during the 1980s and 1990s, today there are some 34.5 million wild kangaroos roaming across Australia. There are a total of four major subspecies of kangaroos on the continent of Australia, with smaller subspecies found in Southeast Asia.

Each year, the Perth Mint has released these stunning high-relief proof Silver Australian Kangaroo coins. The silver blanks used in the production of these beautiful collector items are struck multiple times under intense pressure to add greater dimensional character to the finished product.

On the reverse of each 2016 1 oz Proof Silver Australian Kangaroo coin is the image of the nation’s unofficial symbol. Although not part of the nation’s official seal, the kangaroo is used by government and private entities alike, from the Royal Australian Air Force to Qantas Airlines. Engravings on this face of the coin identify the coin series, the weight, purity, and metal content of the coin.

The obverse side of each 2016 Silver Australian Kangaroo high relief proof bears the right-profile portrait of Queen Elizabeth II. Created in 1998 by Ian Rank-Broadley, this image represents the fourth-generation depiction of Her Majesty used on British, Australian, and other commonwealth nation currency.

Perth Mint is located in Perth, Western Australia, and is a state-owned entity of the local government. The oldest operating facility in Australia, the Perth Mint once belonged to the Royal Mint system on the continent.

If you have any questions about the 2016 1 oz Proof Silver Australian Kangaroo High Relief coin, please contact Silver.com at 888-989-7223. You can also connect with us online using our live web chat or email features.