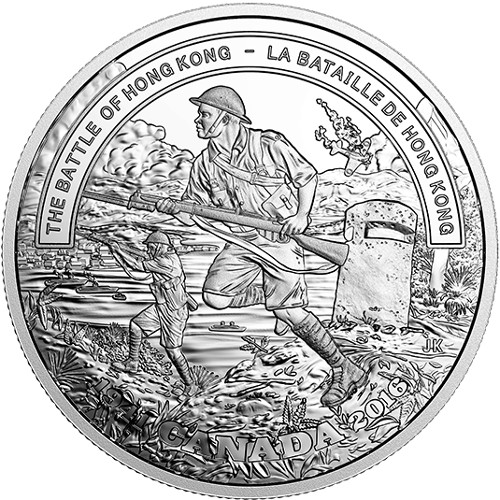 World War II impacted millions of people around the world, including Canadians. The Canadian military fought in the Battle of Hong Kong, which is now being commemorated on a new silver coin from the Royal Canadian Mint. Now, you can get the 2016 1 oz Proof Silver Canadian Second World War Battlefront Series The Battle of Hong Kong Coins at Silver.com.

From December 8 to 25, 1941, the Battle of Hong Kong was being fought by brave Canadian soldiers who were assigned to defend the British Crown Colony from the Japanese air, naval and ground forces. December 25, 2016 will mark the 75th anniversary of the end of this battle.

The reverse of each coin shows a highly detailed scene of the battle’s conditions. Two Canadian soldiers are shown among the Allied forces trying to fight back the Japanese soldiers.

The obverse of each of these coins show what the obverse of a coin would have looked like in 1941. The image of King George VI is a left-profile portrait. As the father of Queen Elizabeth II, he was her predecessor.

Each of these coins will ship out in a special Royal Canadian Mint clamshell with a shipper that is designed like the coin itself.