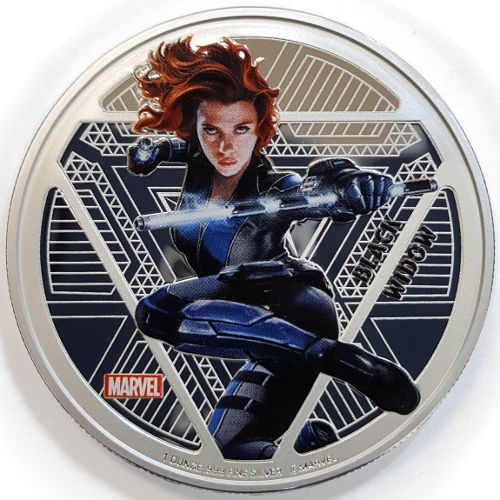 In total there are six coins in the Captain America: Civil War series of silver proof coins. There is one coin for each of the primary members of Team Stark and Team Cap. Each coin features a brilliant, colorized image representing a superhero on the obverse side.

Additionally, each coin in the series ships inside of a collectible tin that includes theatrical artwork from the motion picture. The individual tins represent the character depicted on the coin, exactly as seen in the movie Captain America: Civil War.

On the obverse of the 2016 1 oz Silver Proof Fiji Captain America: Civil War Black Widow coin is the image of Black Widow, who is a master assassin and skilled in hand-to-hand combat. Engravings include her character name and the Marvel Comics logo.

The reverse side of the coin bears the image of the Fijian crest, complete with engravings that identify the nation of issue, year of issue, and the face value of the coin. The collectible tin this coni ships in identifies Black Widow as a member of Team Stark.

Sunshine Mint produced all six coins in the Captain America: Civil War silver proof series. A private minting facility, Sunshine Mint is located in Coeur d’Alene, Idaho and additionally made these coins available as part of a complete six-coin pack. Purchase one, pick and side and purchase just Team Stark or Team Cap, or collect them all. The choice is yours!

Please feel free to contact Silver.com with any questions. You can reach one of our associates on the phone at 888-989-7223, connect with us online using our live web chat, or send us an email with your inquiries.